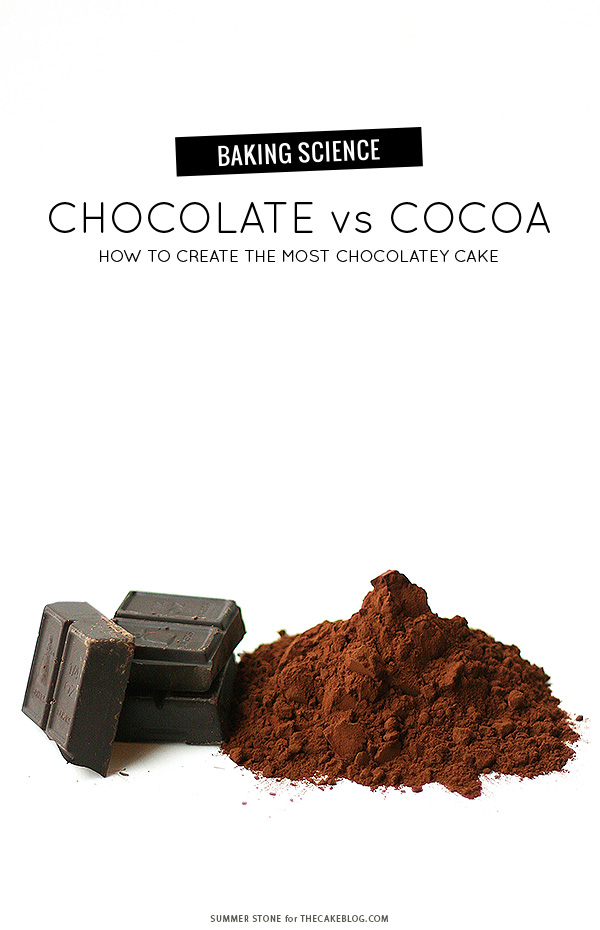 Creating an ideal chocolate cake is a tall order.  You must balance the texture and structure of a cake while maintaining a distinct chocolatey profile.  For some time, I have been in search of a cake that boasts undeniable chocolate flavor, the kind of cake where you can close your eyes and tell, beyond a shadow of a doubt, that it is chocolate cake you are eating.  One of the important issues to consider in chocolate recipe formulations is the whether to use chocolate in the cake, cocoa powder or a combination of the two.  Here I will take a look at each of these ingredients or ingredient combinations when baked in a cake and discuss which comes across with the best flavor and texture profile.

Chocolate and cocoa powder come from cacao beans which have been fermented, extracted and dried.  The beans are typically around 50 percent cocoa butter.  Cocoa butter is extracted from cocoa beans in the process which creates cocoa powder while additional cocoa butter is required when manufacturing chocolate to give it the appropriate taste, texture and mouthfeel.  Some cocoa powders have virtually all of the cocoa butter removed resulting in a powder consisting primarily of finely ground cocoa solids.  Other manufacturers allow a portion of the cocoa butter to remain yielding a more rich, fattier cocoa; some cocoas retain as much as 25 percent fat.  Cocoa powders generally come in two forms, natural or Dutch processed.  Dutch processed cocoa has been treated with alkalizing agents which neutralize the cocoa’s acidity altering its flavor and darkening its color.  Natural cocoa is not chemically treated with alkalizing agents and has a lighter color and acidic pH. 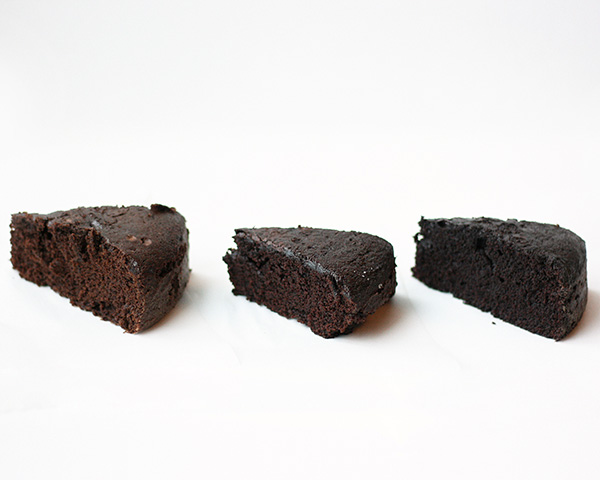 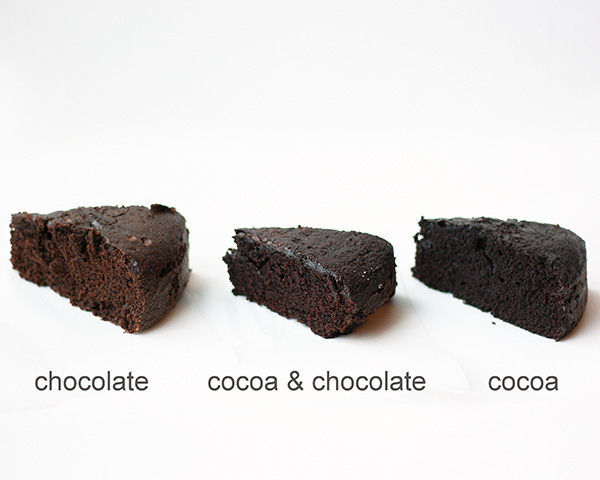 The cake that contained only unsweetened chocolate had a mild, but well-rounded chocolate flavor and was slightly lighter in color than the other two cakes.  This flavor of this cake was not bad in any way but it did not have the chocolate impact that I was looking for. 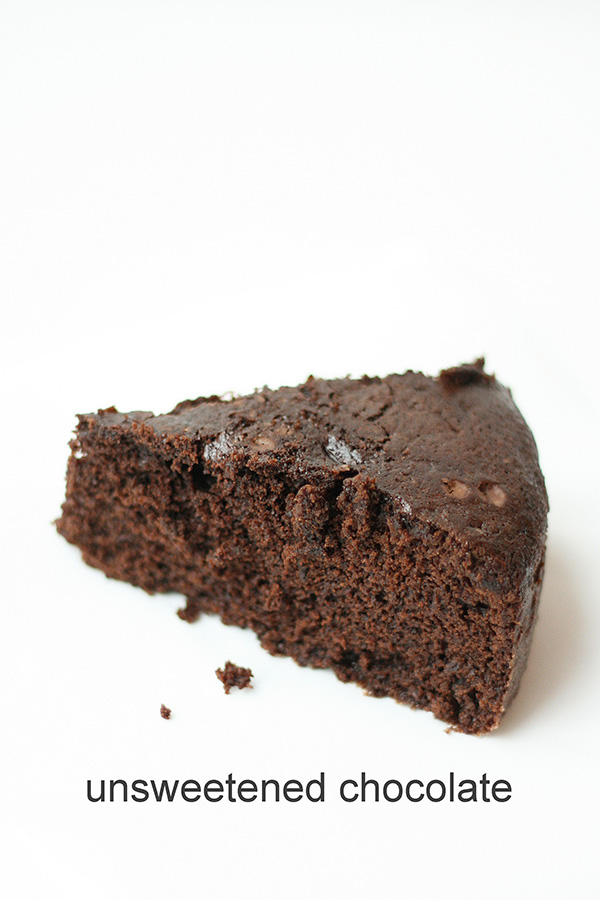 The cake in which I used only cocoa powder had a deep dark color and a bold chocolate flavor.  The cocoa seemed to give the cake a more concentrated boost of chocolate intensity but it was missing something that the cakes with unsweetened chocolate possessed. 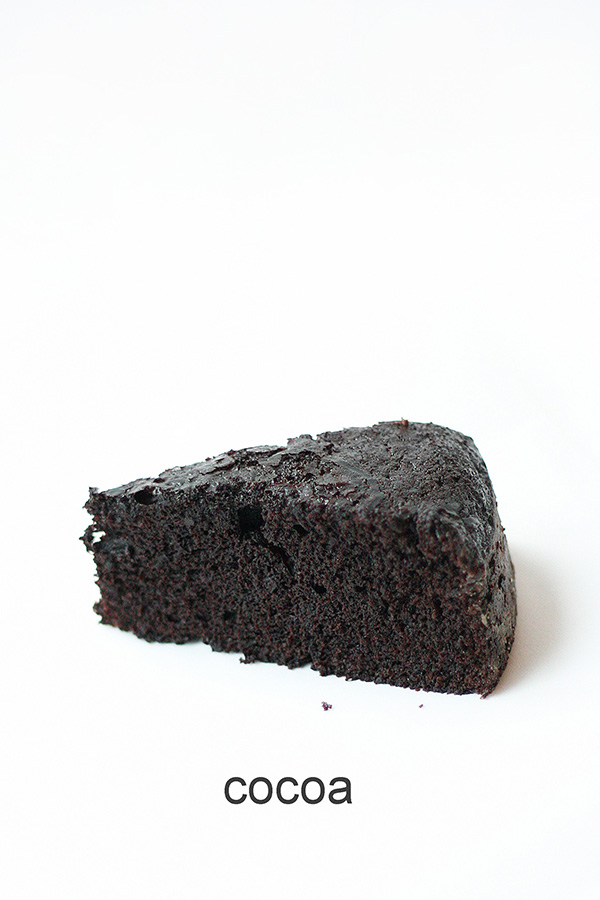 The half unsweetened chocolate half cocoa powder cake had a dark chocolate color, rich flavor and a nuance of cocoa butter that characterized the chocolate-containing cakes.  I felt this flavor combination was the best representation of what a chocolate cake should taste like. 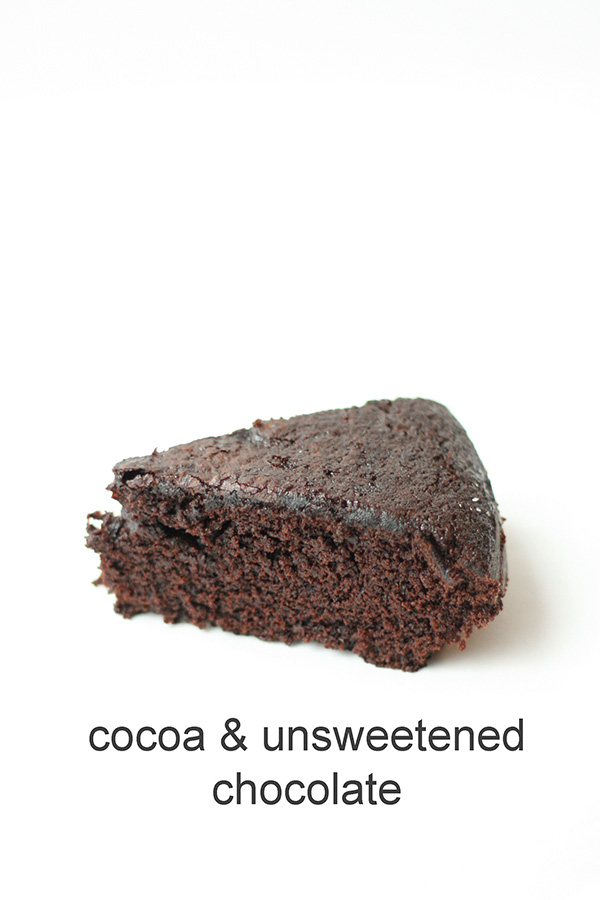 I hope this information helps your chocolate cake-baking efforts!

YOU MAY ALSO ENJOY:
Why Oven Temperature Really Matters
Mixing Up The Perfect Cake
Do Your Cupcakes Need a Rest?
EGGSactly Perfect Baking
Can You Overmix A Cake?