4… 3… 2… 1… 0?? To help us prep for the upcoming holiday baking season, Summer Stone is here to share some insight on how eggs affect our cakes…

How many eggs exactly does it take to make a great cake? In a traditional 9-inch, two-layer American butter cake, four eggs seem to be the typical number found in most recipes, but other butter cake recipes call for anywhere from 2 to 6 eggs. So what number of eggs is really best? 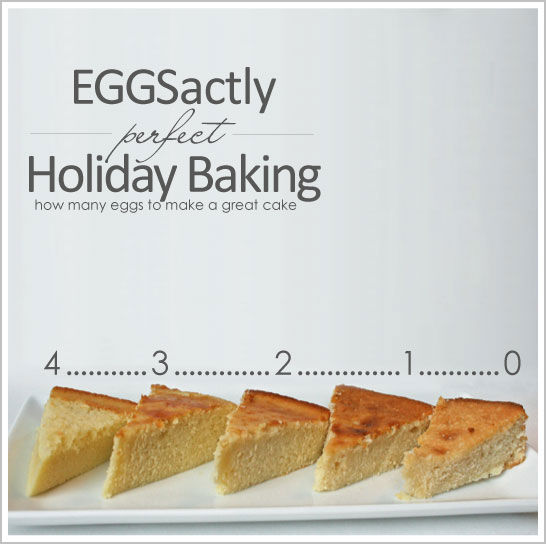 First, let’s take a look at the role that eggs play in the characteristics of a cake. The inherent complexity of an egg, lends itself to a diverse number of roles in the cake’s final product. Here are the major duties eggs perform:

Knowing all of the facts about the functions of eggs in cake, it seems like it would be easy to determine how adding or subtracting a couple of eggs from a recipe would affect the final cake product; but unfortunately it is difficult to say which roles are the most significant and how other ingredients, with cross-over jobs, react when eggs are added or taken away. To get a real feel for what will happen we have to move beyond theory and into the oven.

Let’s take a look at what actually happens when you disrupt the egg balance in a cake recipe. I baked 5 eight-inch cake layers, each with a different number of eggs added, in order to get a feel for how egg volume variation contributes to changes in the overall cake. Each cake layer received 0, 1, 2, 3 or 4 eggs (approximately equivalent to a cake recipe with 0, 3, 6, 9 or 12 eggs). Differences were noticeable immediately after the batters were mixed. The eggless batter was extremely thick in consistency and very pale in color while the 4-egg cake was more golden and thinner in consistency.

Once baked, taste was also a factor in the differences between the egg-varying cake layers. The layer with no eggs had a noticeable raw flour taste and was excessively sweet. The cake layer with four eggs was markedly eggy tasting like a baked custard or bread pudding. All three of the moderately-egged layers were pleasant tasting. 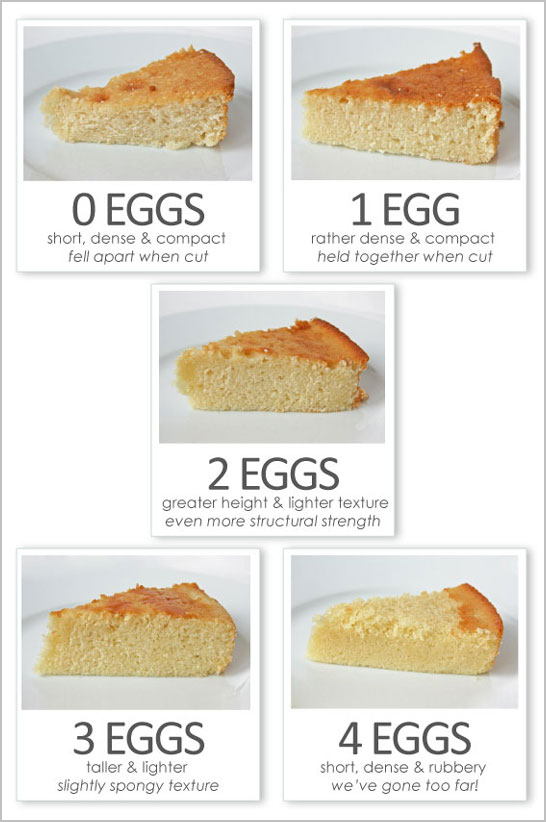 The most significant variance between the layers was their structure. The no-egg layer was short, dense and compact and had so little structural integrity I could barely remove a piece from the cake without if falling apart. The one-egg layer was still rather dense and compact but held together when cut. The two-egg cake layer was greater height and lighter texture with even more structural strength. The three-egg layer was even taller and lighter than the two-egg cake, but the egg structure was reaching the limits of its usefulness and the cake began to take on a slightly spongy texture. The four-egg layer was short, dense and rubbery (if you have ever had a génoise or chiffon cake fall you will know exactly what I am talking about).

Overall, changing the number of eggs in your cake recipe can alter the properties of your cake. Too few eggs will yield a cake that is overly compact and doesn’t hold together will. Too many eggs can leave you with a spongy or rubbery mess. But egg volumes can be manipulated to lighten the texture of a cake or add strength to a cake that needs to be carved. Try varying the number of eggs in your favorite recipe to determine “eggsactly” what works for you.