Stars and Stripes Cake – how to make glittery, star shaped cake toppers on wire. An easy cake decoration that can be made in advance! A new tutorial by our contributors, Mary and Brenda Maher of Cakegirls. 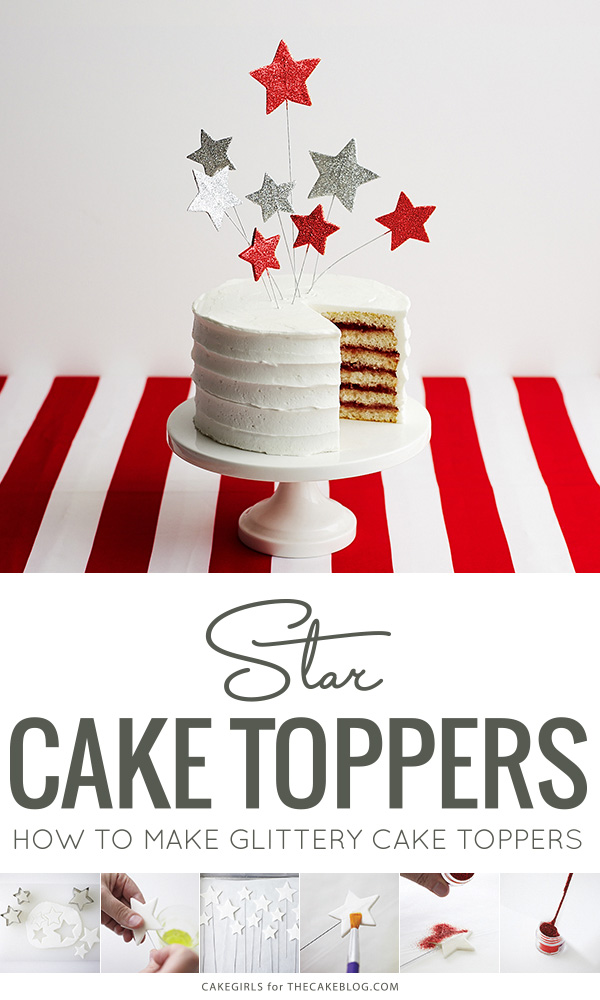 I always have a snap lid container of bouncy stars on wires at the ready to add to any cake as I see fit.  I think many cake decorators do.  Why, you ask?  Well, for me, they’re like a great pair of earrings, quick to add and they make the outfit.  Sometimes they work as an accent when your cake already has a lot goin’ on and sometimes they’re the focal point. 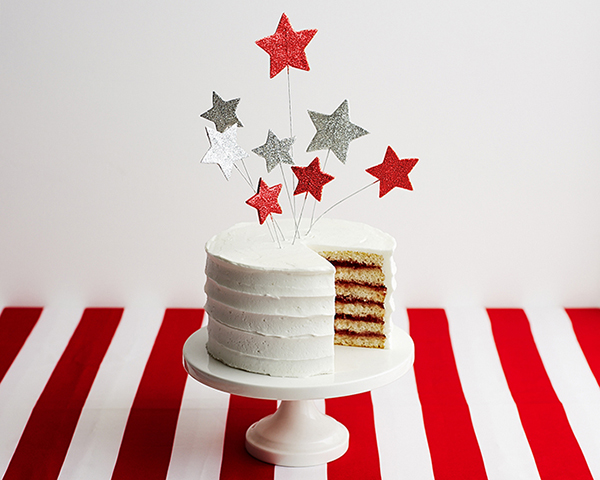 I make my stars out of gum paste so that they’re sturdy and last a long time.  I also make them without any additional decoration so that I can pull them and customize the color and sparkle according to what the cake design requires.  So, this came in handy when I put together this “Stars and Stripes” cake.  I wanted a really simple 4th of July design that wasn’t too fussy and still captured the theme.  Layers of vanilla cake filled with strawberry preserves acts as the stripes. Silver and red glittering stars act as the fireworks.  It’s the perfect, pretty picnic cake for the Independence Day table and a great go to technique for any cake occasion.

Start this project several days in advance or at least one day ahead, to allow for drying time.

Place one egg white in a small dish and set aside.  Next, use scissors to cut wire pieces varying lengths, leaving some longer than others.  Set these aside.

Next, coat your rolling surface with a very, very thin layer of shortening and roll out a small portion of gum paste.  Roll the gumpaste no thicker than 1/8″ or the stars will be too heavy to stand up on the wire.  Use the star cutter set to cut out several stars of varying sizes. 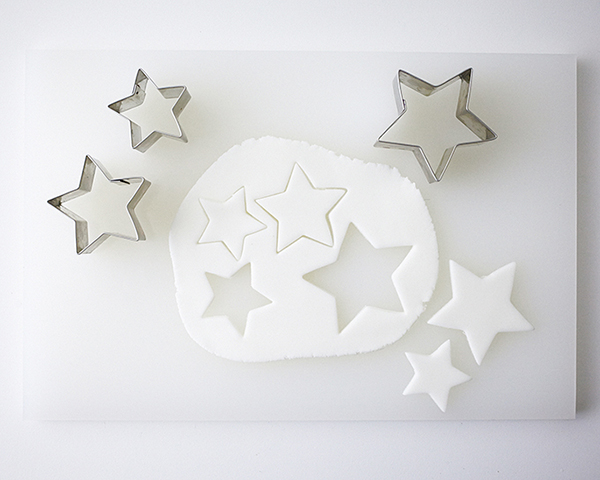 Next, hold a star firmly between your fingers, dip the end of a wire in egg white and gently insert it into the star, going 3/4 of the way up.  (You will be able to faintly see the wire through the gum paste, but should not have any wire poking out of either side). 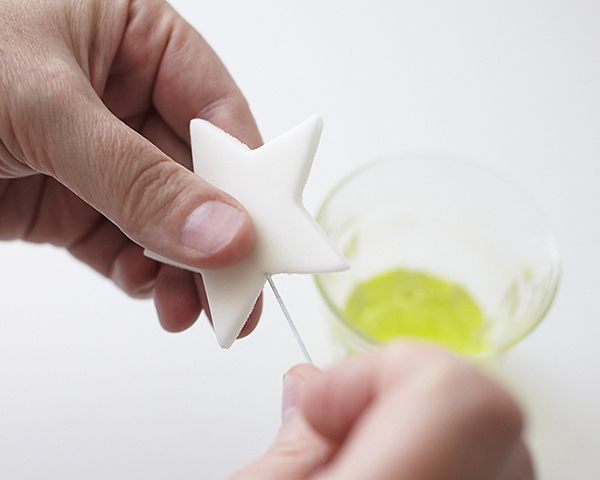 Continue with the remaining stars and place them on a parchment covered tray to dry.  After a few hours, flip the stars over and leave them to dry overnight or longer. 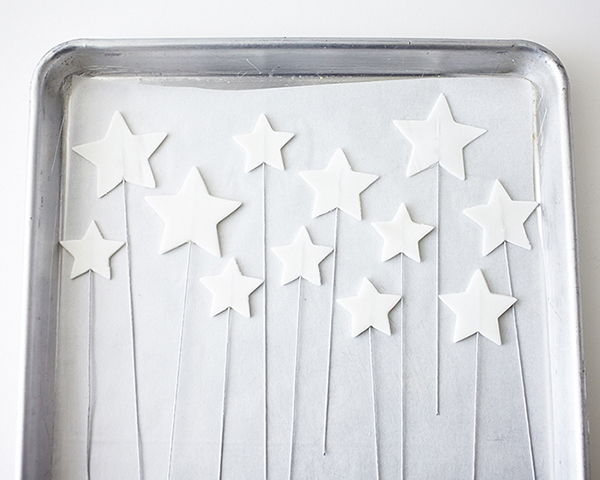 Once dry, brush a star with a light coating of egg white and sprinkle in disco dust.  Use a small piece of parchment paper to catch the excess disco dust so that you can reuse it.

Please Note: Disco dust is not a food product and should not be considered as such.  These toppers are for decoration only. 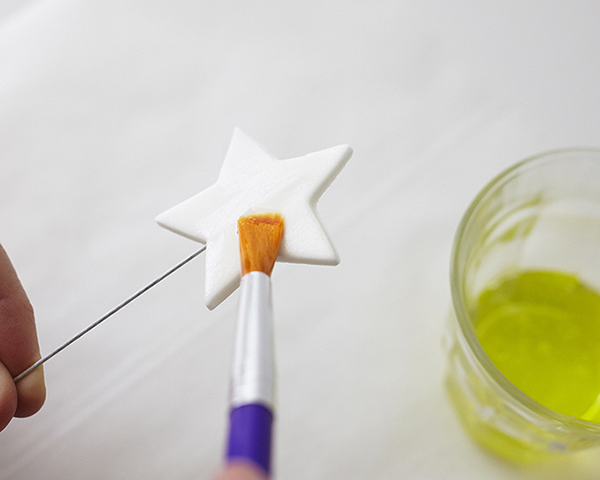 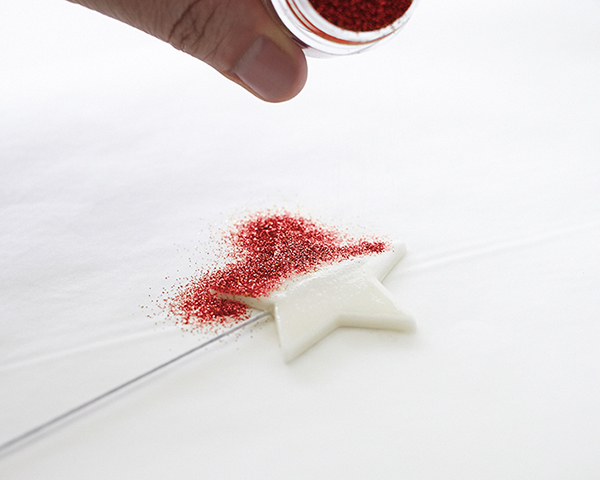 Fold the small piece of parchment in half and gently funnel the excess disco dust back into the container. 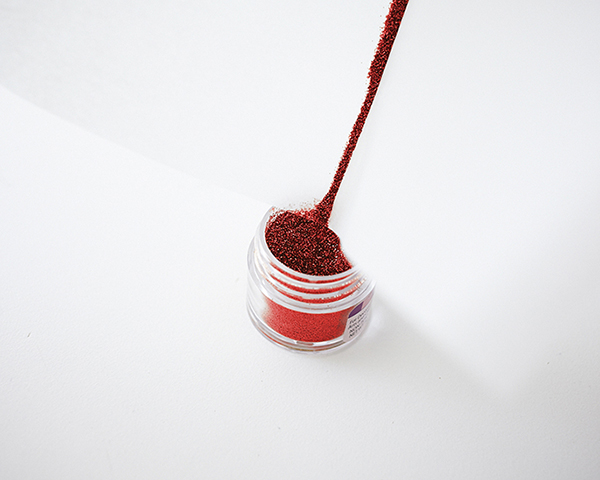 Coat the stars in various colors of disco dust and leave to dry for an hour.  Insert them into your finished cake. 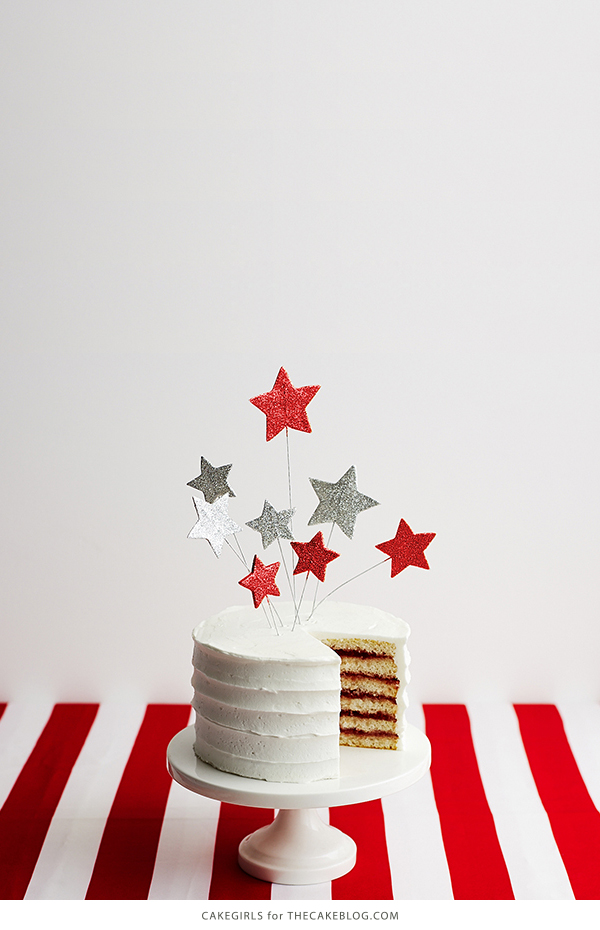 Cakegirls are sisters Mary and Brenda Maher. After years of making cakes professionally, they now share their tips and tricks at www.thecakegirls.com, an online store where you can buy cake supplies, party accents and see D.I.Y. ideas for the inspired home baker. Read more about Mary and Brenda on their bio page.