For years our family has enjoyed a Thanksgiving tradition of good football.  Just not any football, but Aggie football.  Yes, I am an Aggie.  So is my husband and my sister (most likely due to my brainwashing her at a young age!).  And when I think of Thanksgiving, I think of the big game… Texas A&M vs Texas.    This is the rivalry of all rivalries.  Old foes meet up for a bitter battle to the end.  So keeping in the spirit, I thought we’d have a friendly little cake competition.  Bevo the cake takes on an Aggie ring cake.  Who will win this Lonestar CAKE Showdown? 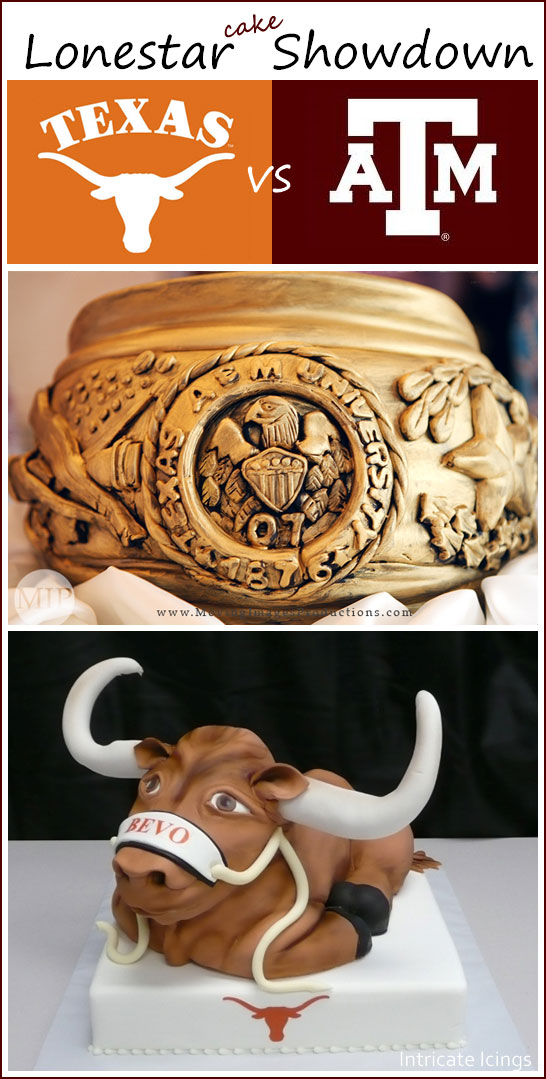 So listen up Aggie fans, Longhorn fans and cake fans.  Cast your vote now by leaving a comment below.  Let’s see who will win this battle of the cakes!  The winner gets bragging rights…. until next year!

I promise, Aggie word, to not delete any Longhorn votes.  Honestly, both cakes are quite impressive.  The Bevo cake is the creation of one of our Top Tier cake designers, Intricate Icings.  Rachael Teufel and her team do such amazing work.  You can see more of their stunning designs in their Top Tier listing and on the Intricate Icings website and blog.