I’ve been dying to share this shower with you for months!  You may remember that back in JUNE, I mentioned that my family was hosting a baby for my sister who was expecting her first child.  My sweet little niece, Addison, was born in July and is now almost four months old!  It’s about time for me to share this shower!  It debuted earlier today on Hostess with the Mostess (yay!) and I’m thrilled to share some additional images and details with you now.

For those of you who are loyal Half Baked readers, you might recall how excited I was about my little sister’s wedding.  Numerous inspiration boards, a bridal shower, photos from the actual day… well fast forward almost two years and my sister was becoming a mommy!  Of course we were going to throw her a shower!  It was a fun collaboration of efforts between four of us, all living in different cities.  My older sister, the two grandmothers-to-be and myself.  Planning everything from afar can be tricky but with countless phone calls, emails and photos exchanged, we somehow managed to pull it off.  Best of all, we were thrilled to celebrate Ashley and welcome Baby Bray with this Elephants on Parade Baby Shower. 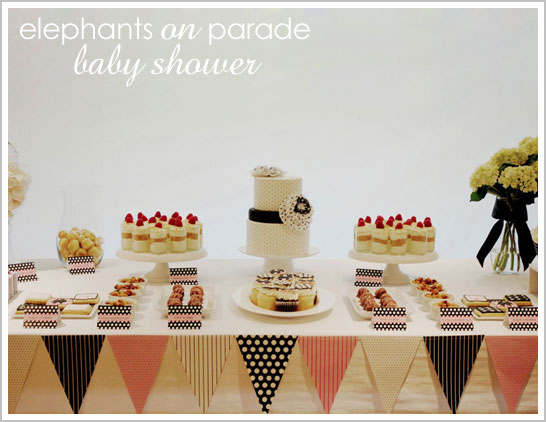 After much discussion, we decided to base the theme on the baby bedding for the nursery.  It’s a fun and vibrant combination of elephants and polka dots.  We wanted the shower to be inspired by the nursery but with our own modern twist.  The color scheme was black and white with pops of pink.  We incorporated numerous different patterns with big dots, little swiss dots and stripes.  And of course – oodles of elephants!! 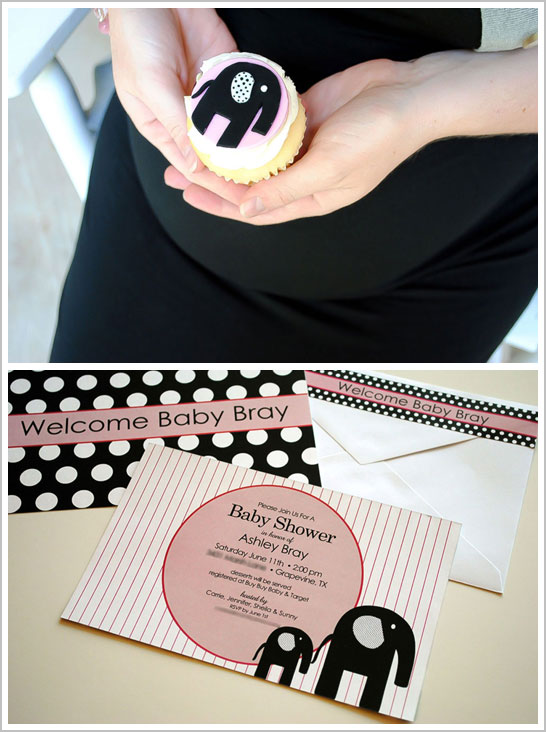 I designed the invitation and we went from there.  The elephants, with their long trunks and polka dot ears, are my rendition of the elephant on the crib bedding.  The back of the invite featured black and white polka dots with a pink stripe reading ‘Welcome Baby Bray’.  (My sister kept the baby’s first name, Addison, a secret until her birth.)

Guest arrived to a front porch lined with black, white and pink flag bunting and a welcome sign featuring the whimsical black elephants.  Little did they know, but those black elephants were on parade inside the house!  From the desserts to the presents and games, elephants everywhere! 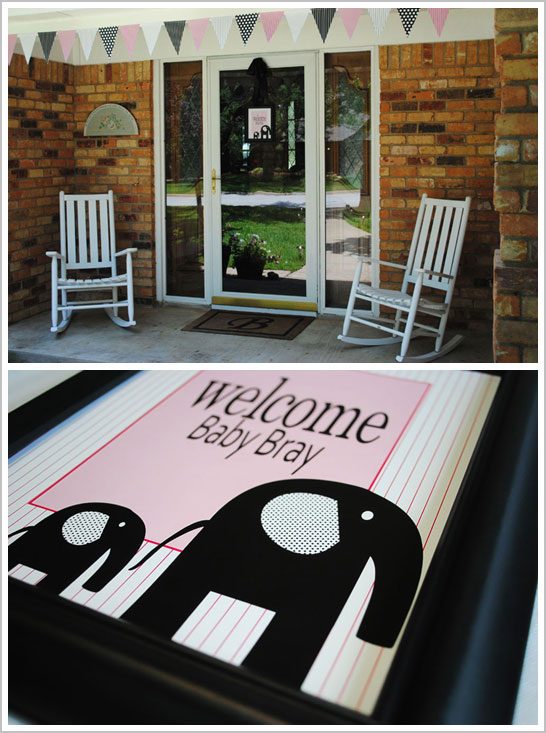 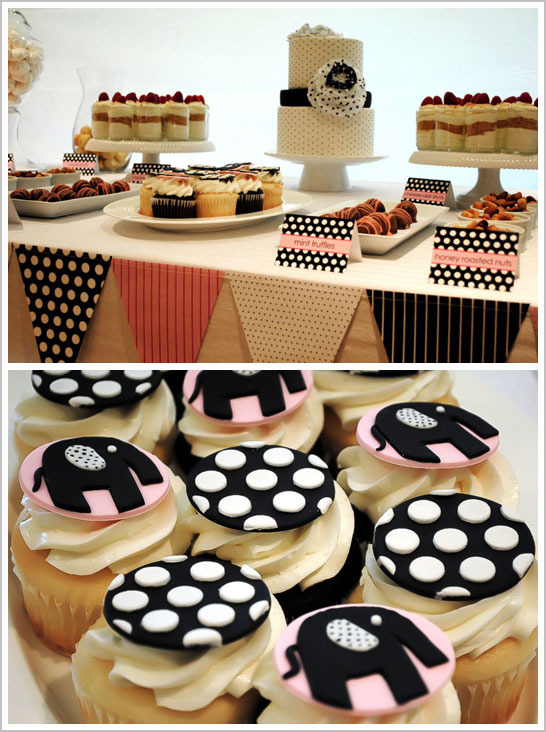 Cupcakes were topped with charming fondant toppers by Brittany at Edible Details who recreated our elephant and polka dots perfectly!  Aren’t they just adorable?  My favorite picture from the whole shower is my sister holding a cupcake over her baby bump!  Only my sister would be willing to put up with me zooming in to get just the right picture! 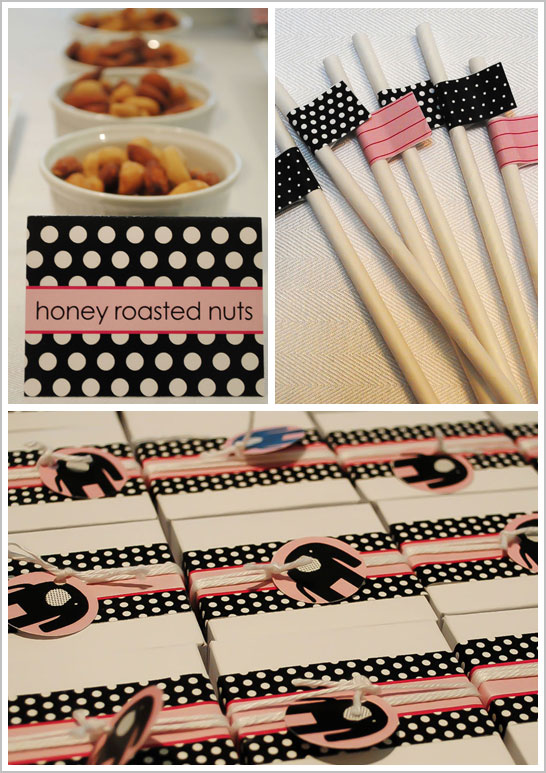 My older sister, Jennifer, crafted a coordinating diaper cake which created a playful centerpiece for the living room along with much discussion about it’s fabulousness!  We had such a hard time getting a good picture of it but let’s just say that many of the guests thought it was a real cake!  Additional flag bunting wrapped the front table where guests dropped off their gifts while signing the baby book and grabbing a matching name tag.  A plush toy elephant and soft blocks, custom made by Little Sidekick in funky black and white fabrics, added an extra touch of decor and a gift for my niece to keep! 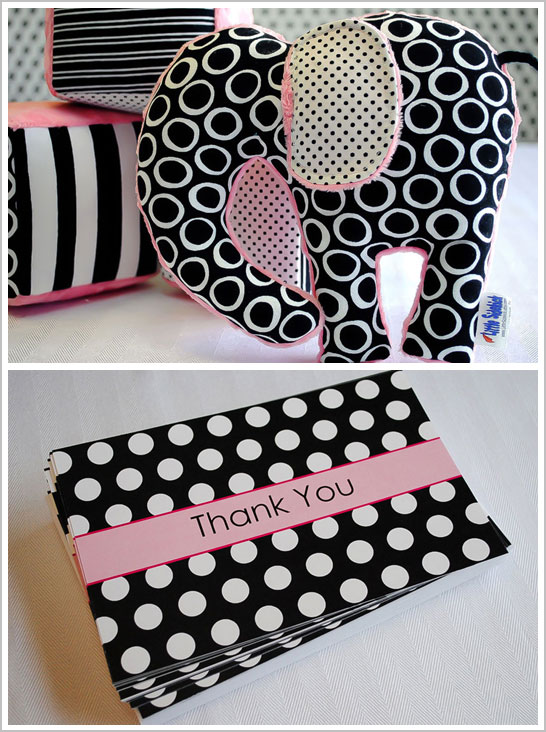 Of course, I designed the cake with it’s sassy cupcake liner flower. {A tutorial on how to make this flower is coming your way soon…}  Additional desserts included meringue cookies, cream puffs, mint truffles and cheesecake shooters (recipe here). Lime Tea Punch and lemon water was served to wash it all down. 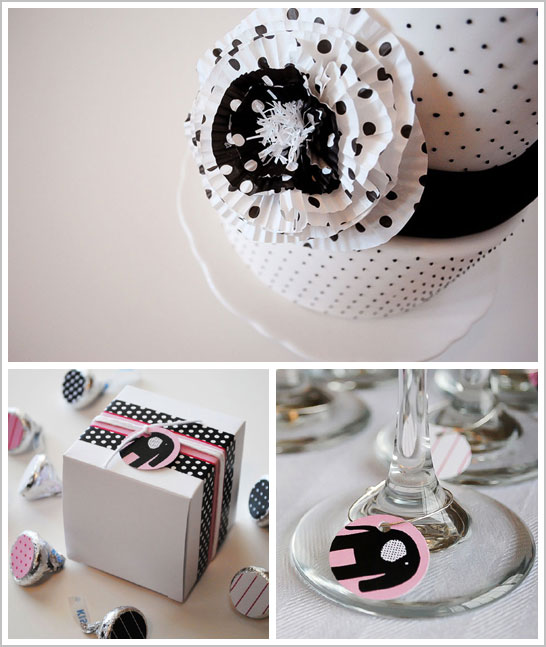 To help balance the sugar rush, we served up portions of mixed nuts and white cheddar popcorn in paper cones.  Baby Addison’s Grandpa even got into the shower spirit and made custom stands for the popcorn cones.  Like I said, this was a team planning event! 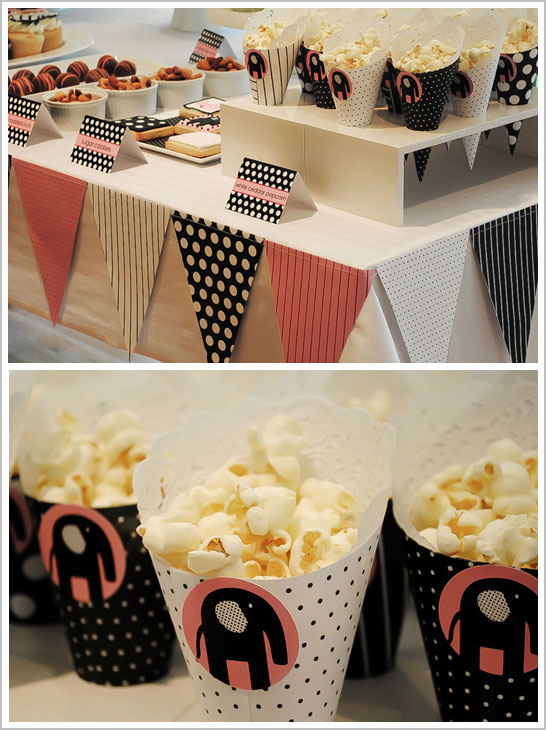 It was such a great day, showering Ashley with love and well wishes as we welcomed her sweet baby girl.  A huge thank you to Jennifer, Sheila and Sunny for all of their help with this shower.  From the countless planning emails to the shopping, baking, sewing and crafting…  I think we make a pretty good team!

Thanks to Jenn at Hostess with the Mostess for featuring our Elephants on Parade Baby Shower!  You can see and read more about it in her post HERE.