BAKING ASSUMPTION: It is necessary to sift or whisk dry ingredients together.

To sift or not to sift, that is the question.  Most recipes call for either sifting or whisking together your dry ingredients before combining them with the other ingredients.  I wanted to take a look at the necessity of these practices and see what types of differences these methods made, if any. 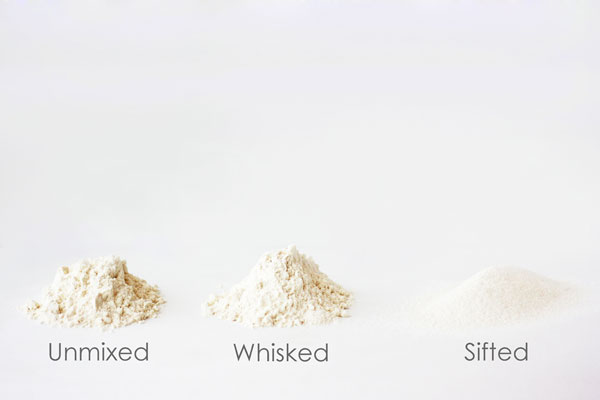 Let’s take a quick look at how whisking and sifting affect dry ingredients.  The image above illustrates the how whisking and sifting affect the texture of the flour.  When flour is whisked, wires separate flour particles an aerate mixture.  Similarly, when flour is sifted the grain particles are separated but to a much finer degree due to the close proximity of the wires in the mesh.  As the flour falls from the sieve it becomes aerated.  Whisked flour is slightly more smooth and uniform than flour that was unmixed and poured directly onto the board, but the texture of the sifted flour is incredibly fine and fluffy. 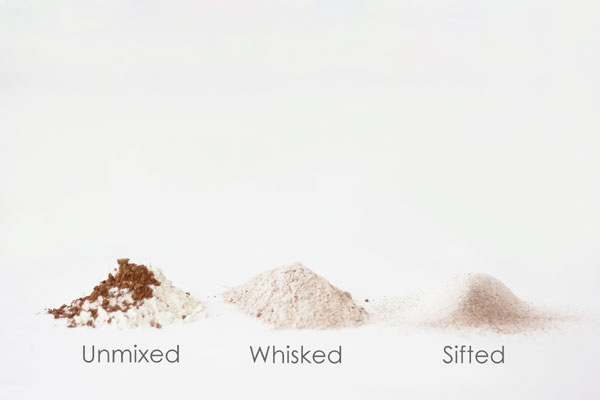 An additional reason for whisking or sifting flour is to incorporate and distribute dry ingredients such as salt and leavening agents throughout the flour.  To illustrate the effectiveness of either method, I added cocoa powder to the flour and left them unmixed, whisked them together, or sifted them together.  As you can see, whisking is the most effective way to distribute ingredients.  The cocoa is evenly and uniformly spread through the flour after approximately 20 strokes of the whisk.  While sifting improves distribution of dry ingredients, the cocoa fell in almost alternating layers and predominately to one side of the sifted heap.

Now let’s look at what this means in an actual cake.  I have to admit that I don’t usually whisk or sift my dry ingredients together.  I generally sprinkle them into the mixer bowl which contains butter, sugar and eggs.  I have assumed that a good period of mixing following the addition of dry ingredients is enough to evenly distribute them throughout the batter.  It was time to put my assumption to the test.

For this comparison, I creamed the butter and sugar, added the eggs, flavoring and liquid and then divided it into thirds.  To the thirds I added unmixed dry ingredients, whisked dry ingredients or sifted dry ingredients and mixed them each for 1 minute on medium speed.  The cakes were then baked at the same time. 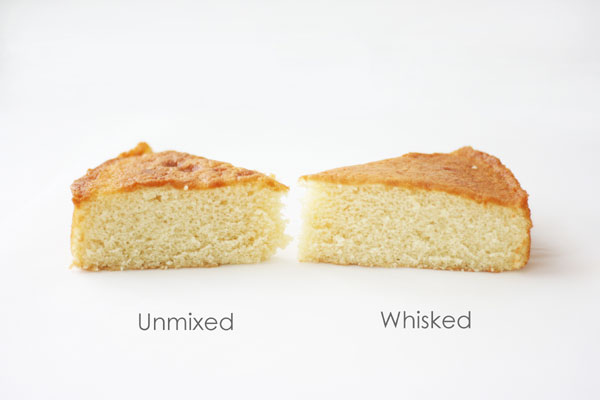 What I found was that cakes were surprisingly similar.  The cakes that were unmixed and whisked were difficult to differentiate.  The most marked difference between the two was the top crust of the cake.  The unmixed dry ingredient cake had a mottled upper crust while the whisked cake had a smooth, uniform top.  They both had a similar texture, lightness and mouthfeel. 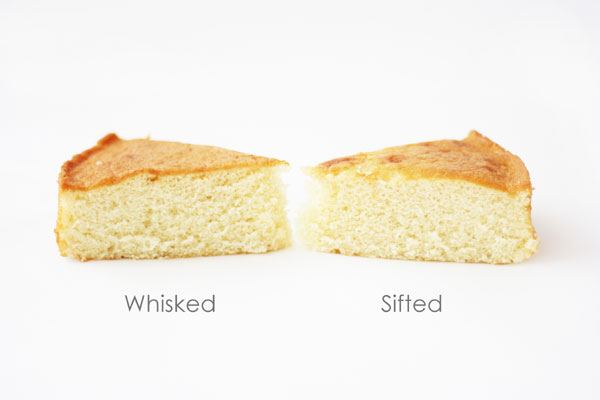 The sifted cake on the other hand was a tad bit finer in texture, but once again the difference was negligible.  The thing that surprised me the most was that the sifted cake was a little drier than the whisked or unmixed cakes.  It would seem that by separating all of the flour clumps, more surface area of the starch was exposed absorbing more fat and liquid making the cake seem a bit more cottony.

It appears that the separation of particles, exemplified by sifting, has more effect on the cake than the distribution of dry ingredients, on which whisking proves the superior method. 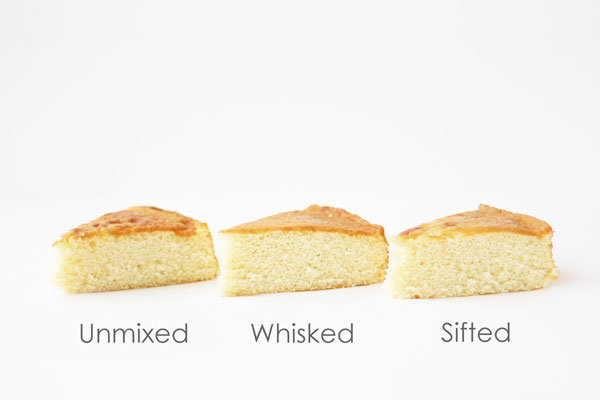 So which technique is the best for your cake?  That depends on your preferences.  If a very fine cake texture is your goal than it may be beneficial to sift.  If moisture is more important to you, you may want to skip the sifting process or add fat and liquids to compensate.  If you minimally mix your cakes after the addition of dry ingredients, it would be advisable to whisk your dry ingredients together before adding them to your wet ingredients.  But if you mix your batter for a minute or more after the dry ingredients are added, whisking is probably not critical.  That’s the beauty of cake; you get to choose!

I hope this has informed the way you add your dry ingredients.