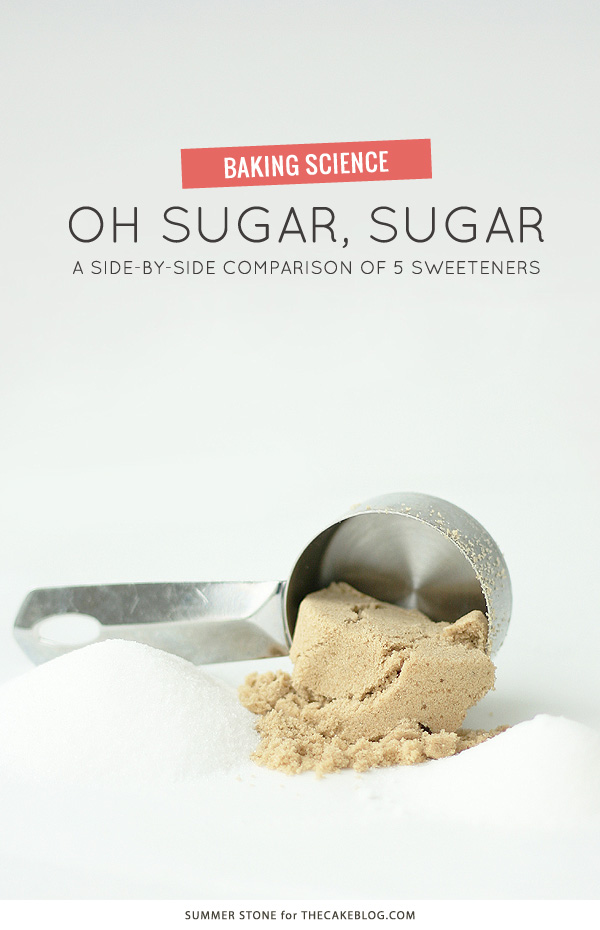 Sweeteners play a critical role in any cake recipe.  They not only impart the sweetness that makes a cake dessert fare but also have a hand in the structure and leavening processes.  The most common sweetener in cakes is granulated sugar, but sometimes other choices are fitting for a particular recipe.  Here we will take a look at how differing sweeteners affect the properties of a cake.  The sweeteners I have chosen to use include granulated sugar, superfine granulated sugar, brown sugar, fructose and stevia.

Here is a more in-depth look at the cake properties that are influenced by sugar:

The size of the sugar granules as well as the type of sweetener will determine the manner in which the cake properties are affected.  Let’s take a look at some examples of sweetener variation and the impact on the final cake.

Granulated Sugar: This standard cake sweetener provides for a light, tender crumb and maximum height of the cake layer. 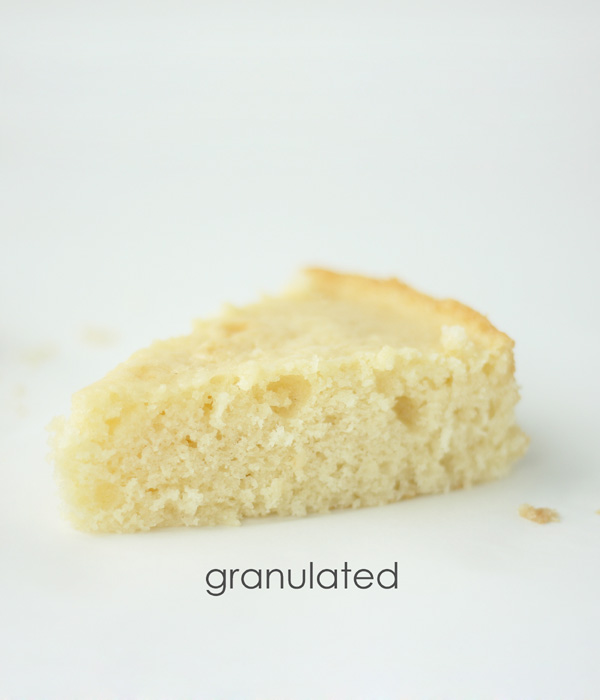 Superfine Sugar: The smaller crystals of this variation of granulated sugar allow them to dissolve faster than their coarser counterpart.  This results in more rapid and effective disruption of structural components and a slightly shorter cake layer than that of granulated sugar.  Small air cells from these small crystals also have a bit of an effect on leavening. 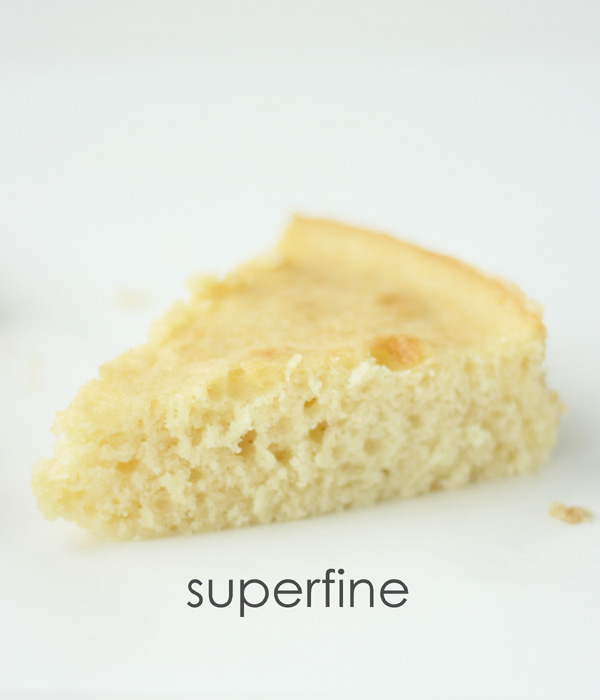 Brown sugar: This sugar is similar to granulated sugar but retains or has a bit of molasses or refiners’ syrup added.  The molasses present in this sweetener provides a distinct flavor and pale beige color to baked goods.  The presence of molasses’ syrup also provides a ready-dissolved sugar that further adds to the tenderness and perhaps moisture of a cake.  This cake layer was shorter than both the granulated and superfine sugar. 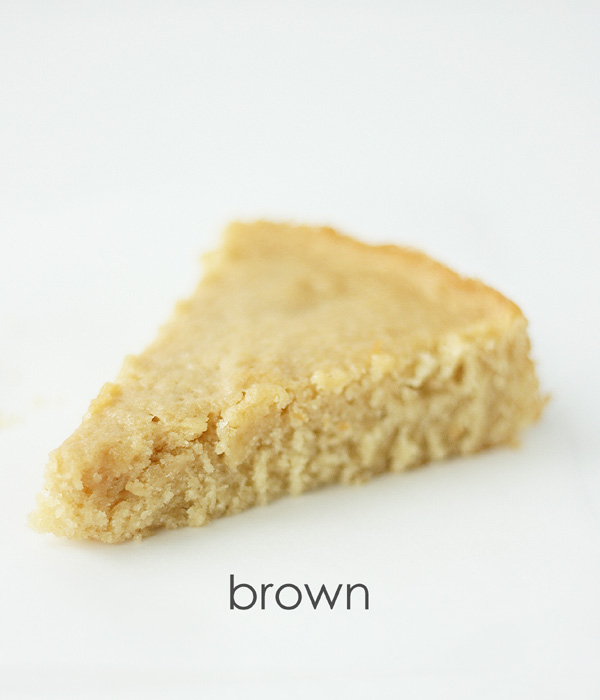 Fructose: Sweeter than granulated sugar, this sweetener gives a unique flavor to baked goods.  In addition, fructose promotes browning which gives the cake a “toasty” taste.  Fructose is also highly hygroscopic (water attracting), which allows a cake made with this sugar to retain moisture over time.  The fructose cake also had a tight crumb and was shorter than the granulated sugar cakes. 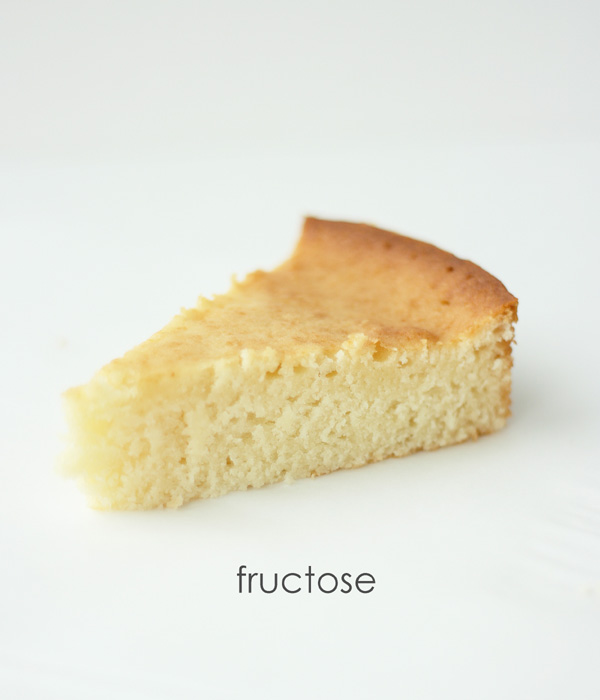 Stevia: The importance of sugar can be clearly seen in a cake made without it.  In my opinion, stevia, on its own, is a poor substitute for sugar.  The cake that resulted was pale and cracked on the top with a very tight, compact crumb, short layers and a bittersweet flavor.  If you choose to reduce the sugar in your cakes, I would recommend using no more than half of an alternate sweetener. 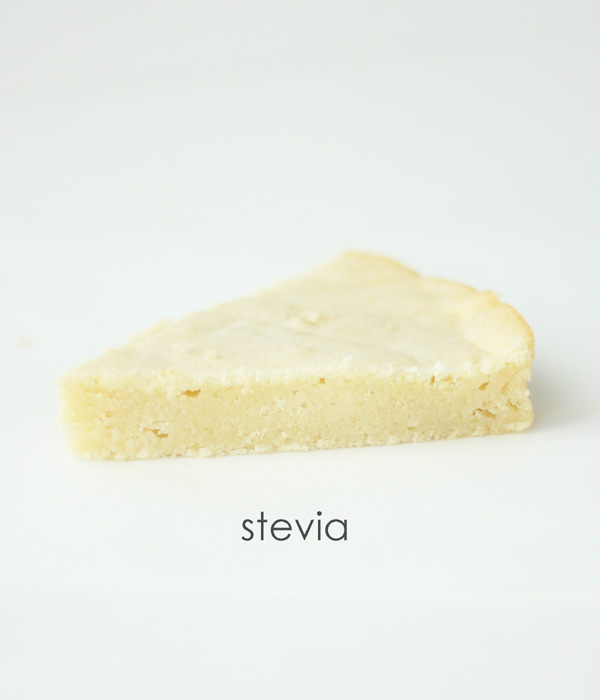 It appears that granulated sugar is still the gold standard for most cake applications.  Superfine sugar can be used but weakens the structure of the cake a bit.  Brown sugar adds a warm, butterscotch flavor but also weakens the cake structure and is less fluffy than the granulated and superfine sugar cakes.  Fructose could be used in a cake for those with dietary restrictions, but I would not recommend using stevia alone because of the taste and structural effects. 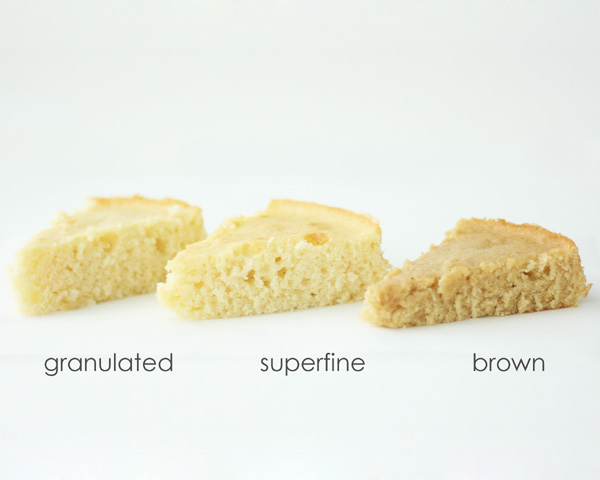 I hope this helps you make decisions about sugar in your recipes.