Our contributor, Summer Stone Polzel of Cake Paper Party, is back today with a new baking science experiment…. 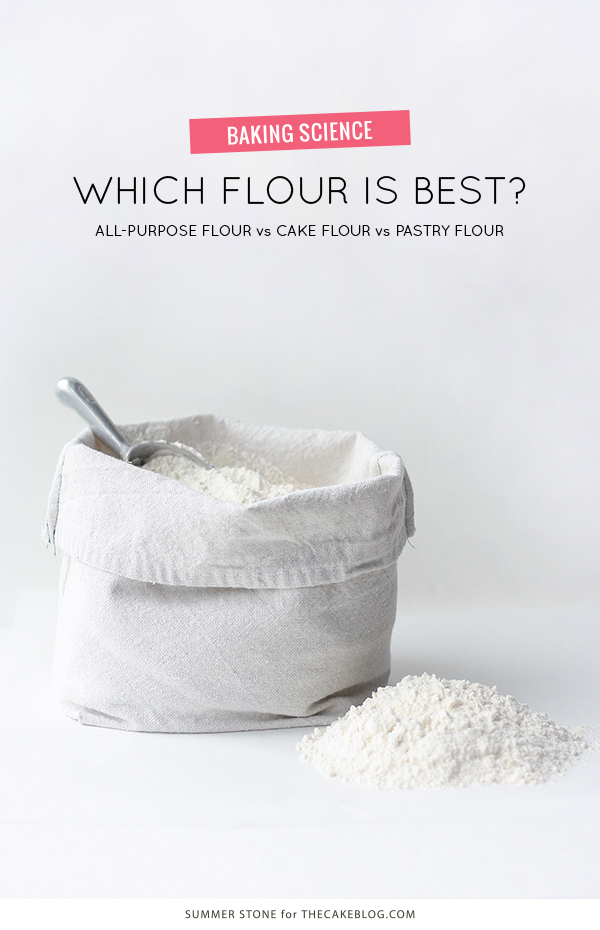 Flour is one of the most important ingredients in a cake recipe. It not only is the structural workhorse of a cake but provides important flavor and textural elements. Choosing the best flour for a cake recipe can be tricky. There are many options on the market and depending on where you are in the world, certain flours may or may not be available. Here I will try to clarify some of the differences between various types of wheat flours and show you how they translate to baked cakes.

Wheat flour is commonly categorized for sale based on protein content. Flour is primarily composed of wheat starch but also contains protein molecules. Most of the protein in flour is the type which converts to gluten in the presence of water. The size of the flour granules can also play a role in the properties of a given flour and the resulting baked product. Finely ground flours create a smaller crumb and better texture in a cake.

Flour can also differ because of the type of wheat grain of origin. Wheat flour comes from either hard wheat or soft wheat grain varieties. Hard wheat varieties cannot be ground as finely as soft wheat types and therefore do not work as well in cakes. Some flour manufacturers will label the type of wheat the flour originates from but often this information is not listed.

Flour can also be divided into that which is bleached and that which is unbleached. Bleached flours are treated with chemicals to lighten the flour’s color. These chemicals include potassium bromate, benzoyl peroxide or chlorine. Health concerns over potassium bromate have caused it to be banned from use in Canada and Europe but are able to be used in the Unites States. Benzoyl peroxide is used in all flour types and does not affect gluten strength. Chlorine is only used in cake flour because it weakens gluten and allows water to be absorbed more readily. Unbleached flours are not treated with whitening chemicals.

Here are the typical wheat flours you can find in stores:

Now let’s see how these differences play out in baking. 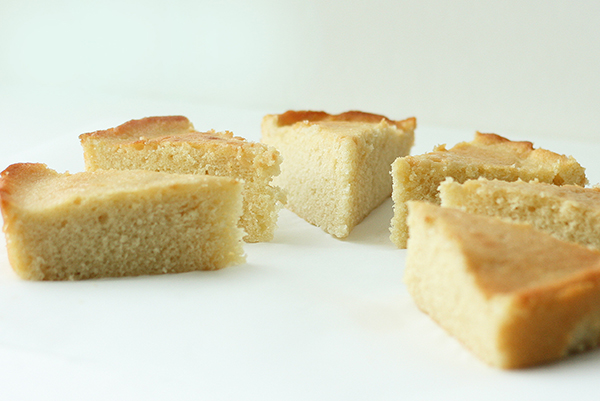 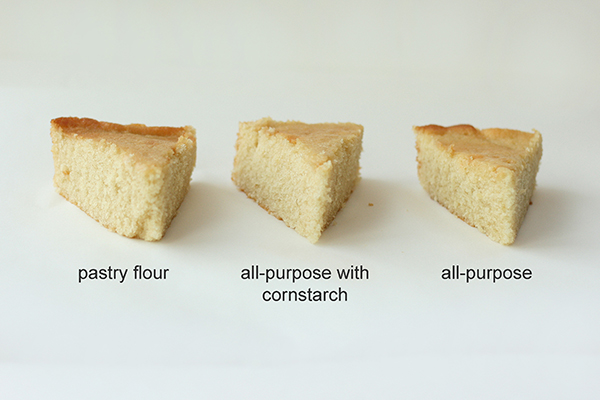 The two cakes made with all-purpose flour were very similar. It seems that the addition of cornstarch has little effect on the baking results. They were both comparatively short, open crumbed, slightly coarse and darker than the pastry flour. The all-purpose flour cakes also had a slightly “wheaty” taste that I can only compare faintly to Play-Doh. Pastry flour made a cake that was a little taller than the all-purpose flour cakes, finer crumbed, lighter in color and had a much improved texture. It was smooth with a nice mouthfeel and mild, appealing taste. 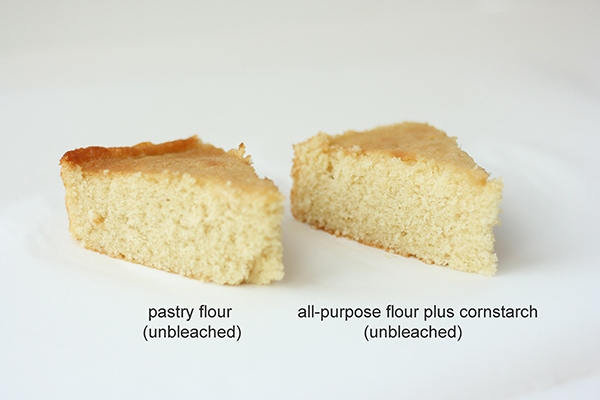 The above photo shows the color variation between the pastry and all-purpose flour-cornstarch cake. While they essentially end up with a similar starch to protein ratio they produce noticeably different cakes. 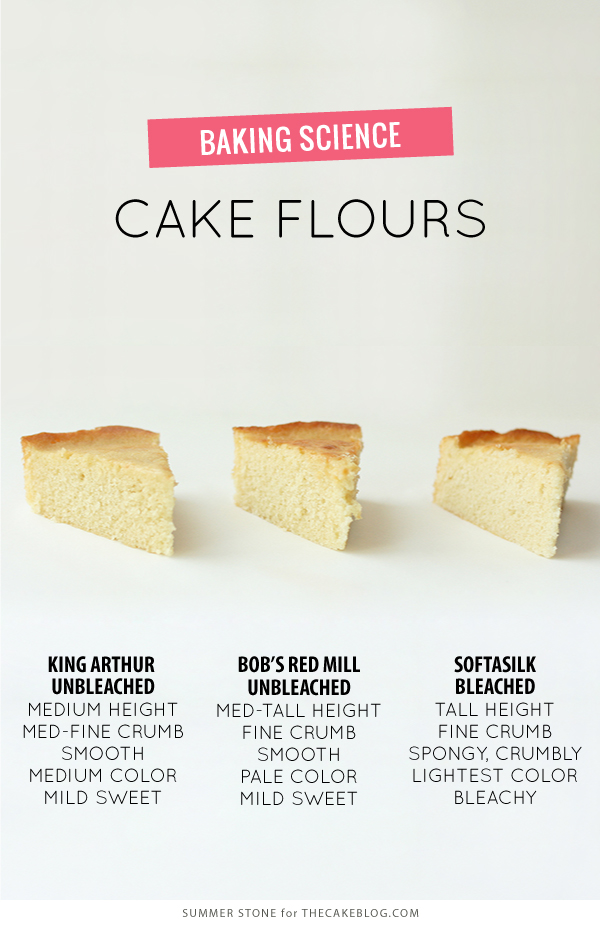 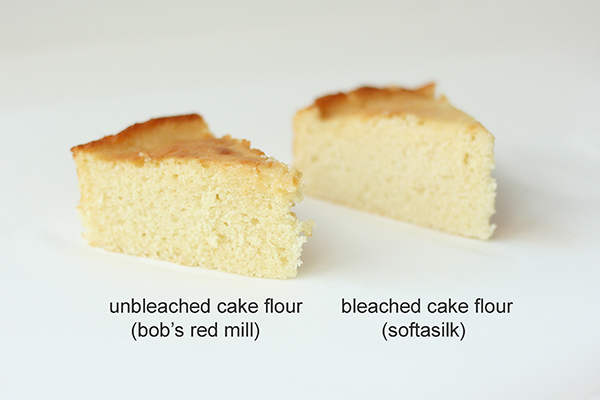 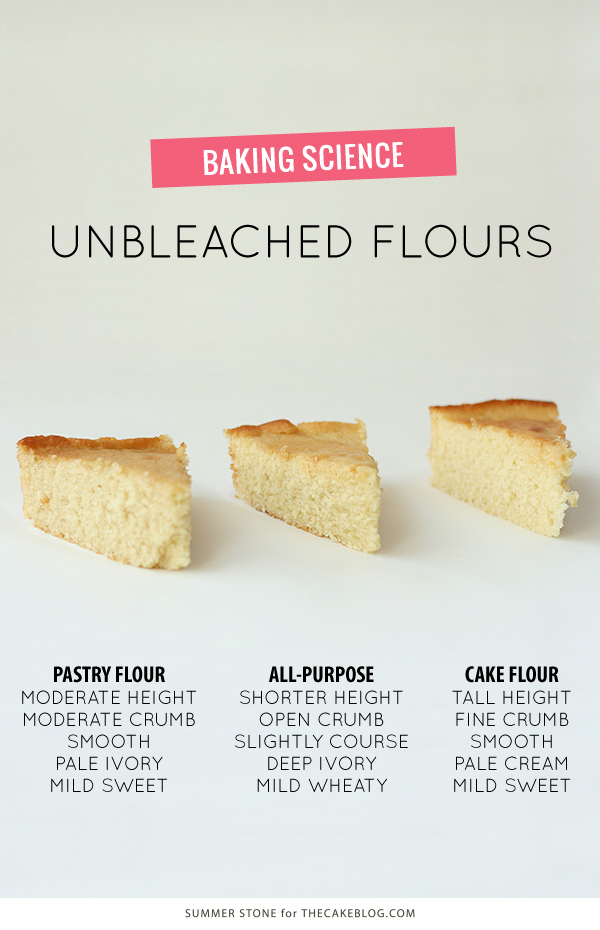 In the end, I was very impressed with the unbleached pastry flour and the unbleached cake flours. While these may be slightly more difficult to locate, their results make it worth the effort. If you cannot locate these types of flours, a combination of half all-purpose flour and half cake flour is a fair substitute (determined from previous experiments). If all-purpose flour is your only option you can still make a wonderful cake, just opt for the lowest protein brand you can find.

YOU MAY ALSO ENJOY:
Why Oven Temperature Really Matters
Chocolate vs Cocoa
Mixing Up The Perfect Cake
Do Your Cupcakes Need a Rest?
Can You Overmix A Cake? 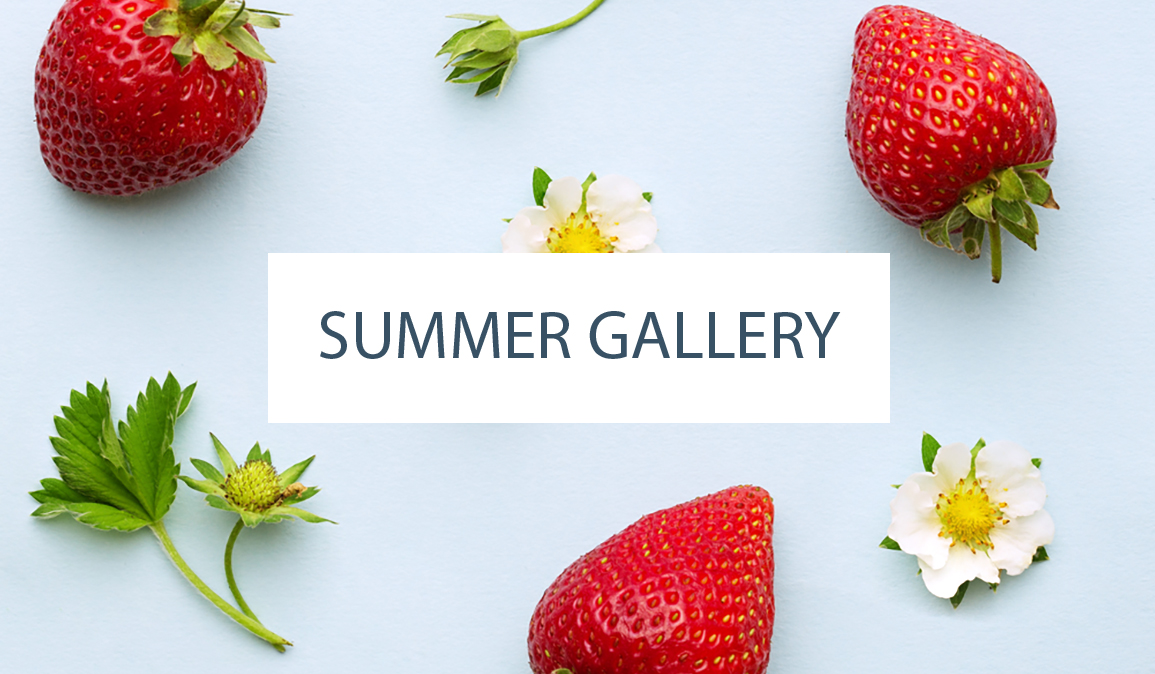