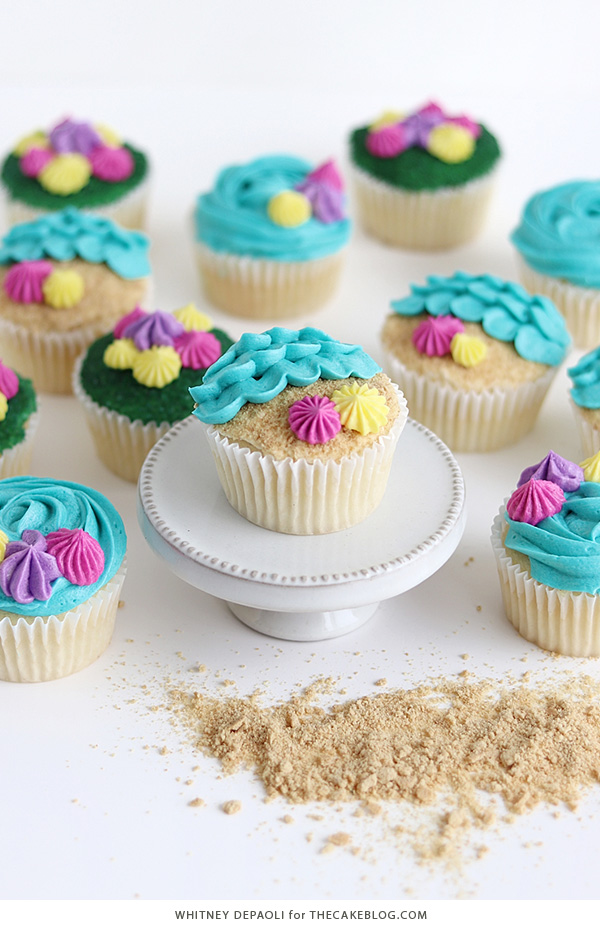 It’s officially summer, my favorite season of all! Probably because where I live, it’s the only time of year that the sun comes out for a whole three months and I just want to be outside all day long. One of my favorite places to be in the summer is at the beach, which is the completely the inspiration behind these cupcakes. Don’t these just make you want to take a swim in the ocean? 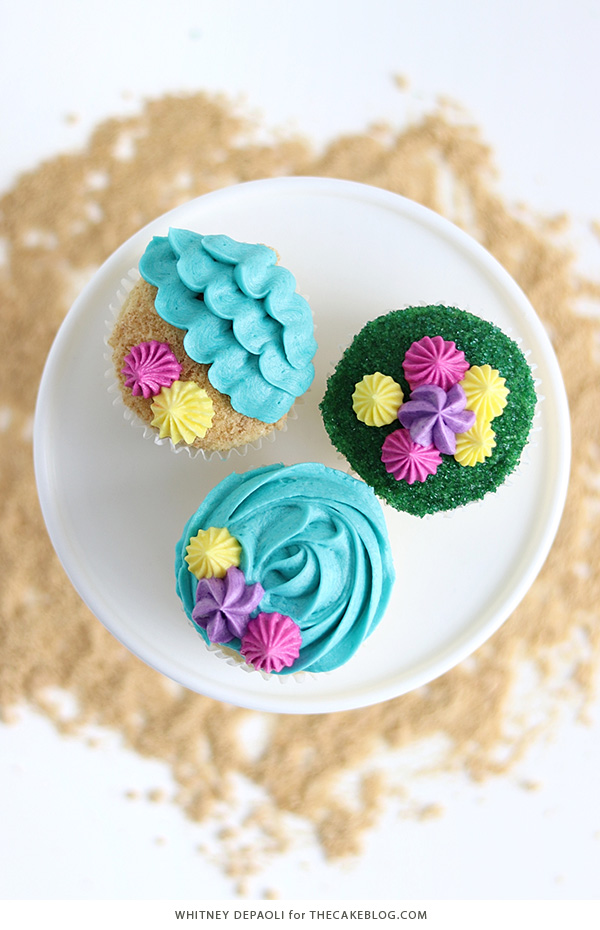 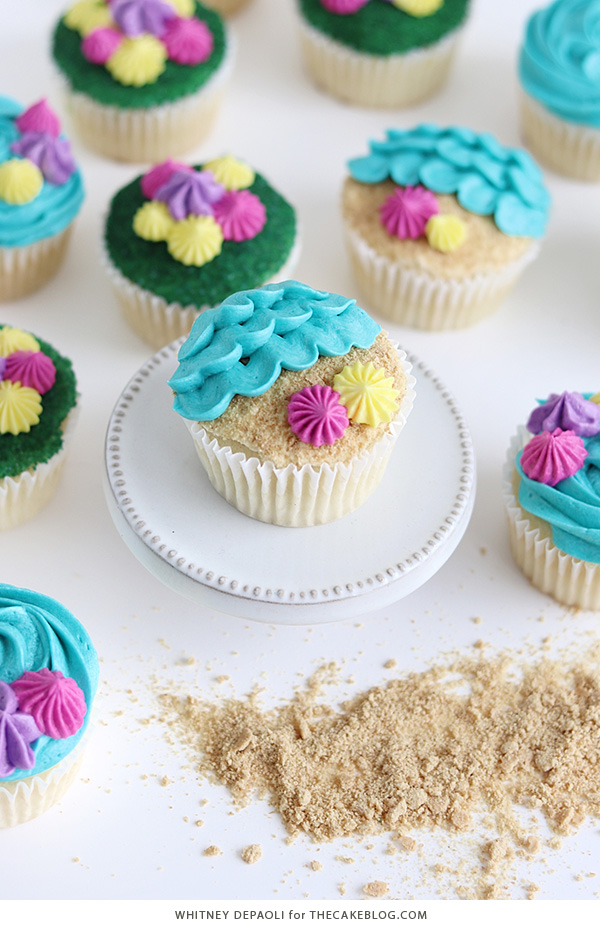 I wanted these cupcakes to have a semi-tropical vibe: sandy beaches, lush greenery, turquoise oceans, and vibrant flowers. Together, there are three different looks that make up this collection of beach cupcakes, and the decorating process for each of them could not be easier! You can feel free to use any kind of buttercream and cupcake flavor palette for these beauties, the only extras you’ll need are some crushed graham crackers (for the sand), some green sugar sprinkles (for the tropical greenery), a few piping tips, and some bold color gels. If you’re feeling extra adventurous, try making your sand out of extra cake scraps using our edible sand tutorial. 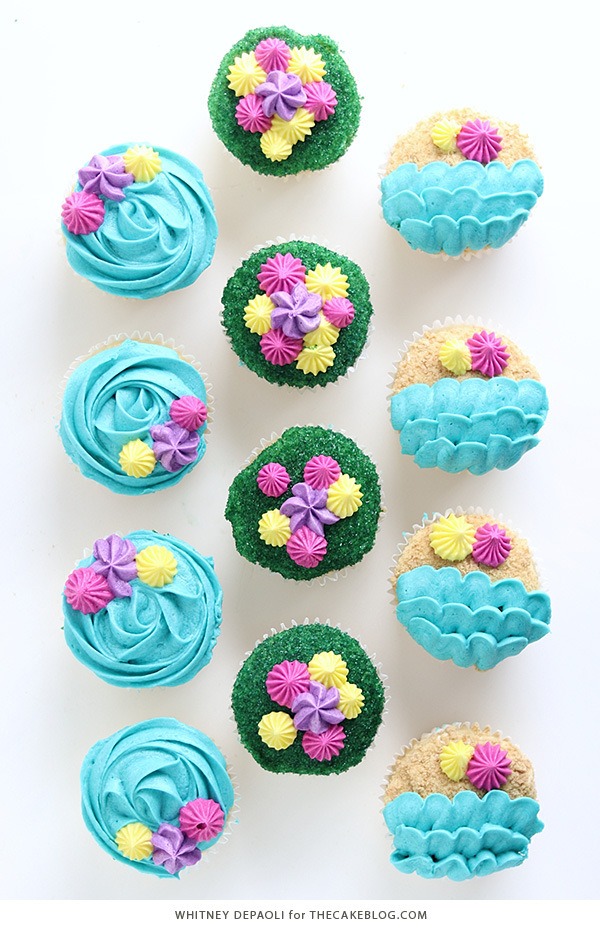 I’ll show you how to make all three styles in this beach-themed collection in the tutorial below. Whether you stick to one style or create all three, they’re bound to add some summer flair to any gathering! 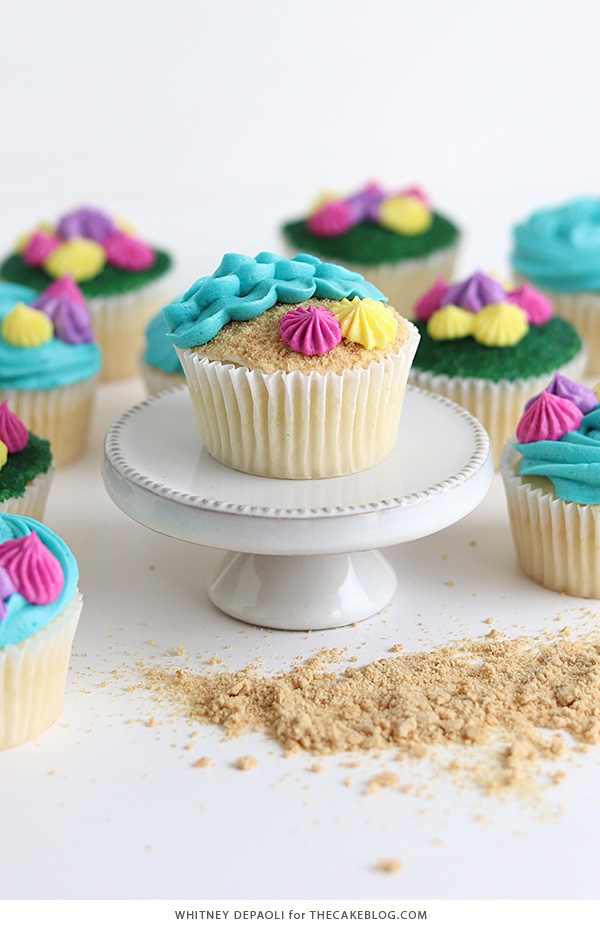 Before you get started, it’s a good idea to whip up your buttercream color palette and get everything ready for cupcake decorating. I divided my batch of vanilla buttercream into five separate bowls and kept one bowl uncolored, then tinted the rest of the bowls with the following: turquoise for the ocean waves, pink, yellow, and purple for the flowers. 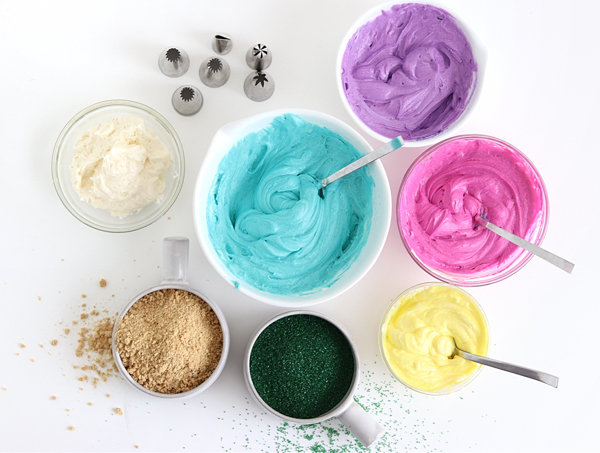 I also poured the crushed graham crackers and green sugar sprinkles into some separate shallow dishes to make it easier for dipping the cupcakes.

TO MAKE THE SANDY BEACH CUPCAKES

Spread a layer of buttercream over the top of the cupcake and dip it into the crushed graham crackers to create the look of a sandy beach. 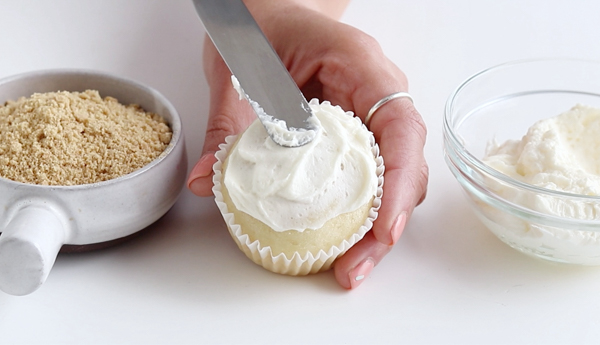 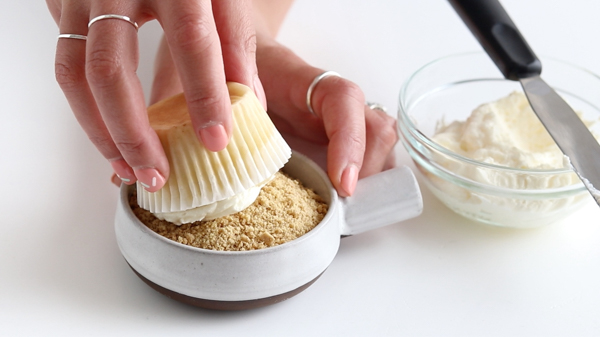 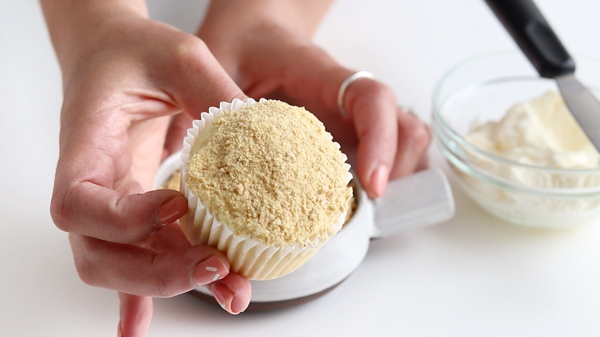 Fit a piping bag with piping tip #104 and place half of the turquoise buttercream into it. Starting in the middle of the cupcake and working your way to the outer edge, pipe a line of ruffles, then overlap it with two subsequent lines of ruffles that end on the outer edge. Look at that beautiful sandy beach with ocean waves! 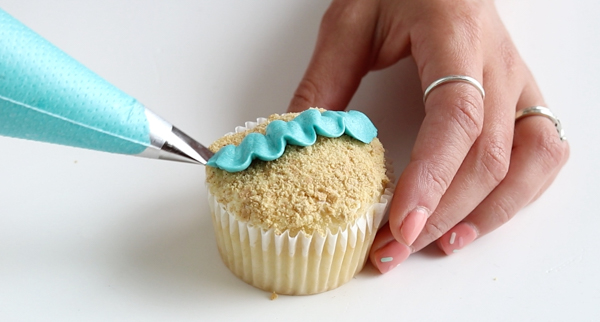 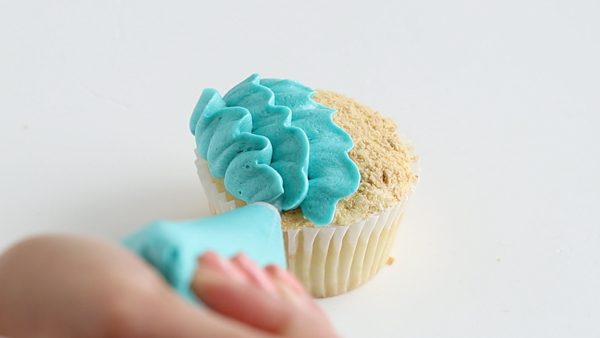 To finish the look, fit two piping bags with piping tip #4B and fill one with pink buttercream and the other with yellow buttercream. Pipe two open stars on the sandy beach to create the look of a few vibrant seashells. 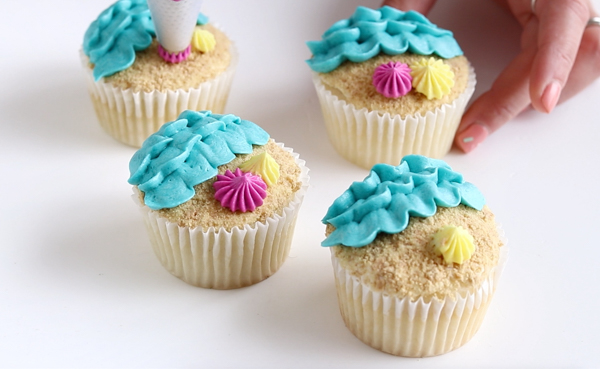 Repeat until you have four cupcakes with the sandy beach look. 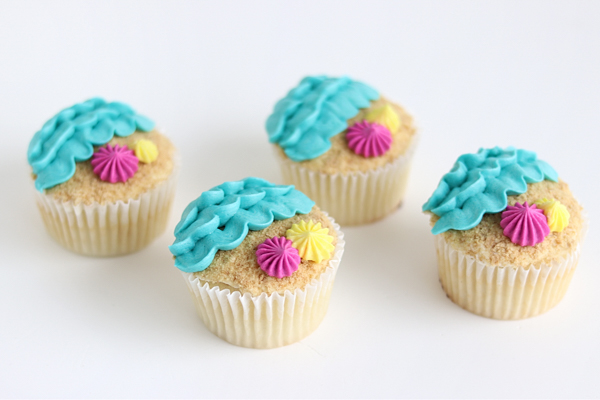 TO MAKE THE LUSH GREEN CUPCAKES

Spread a layer of buttercream over the top of the cupcake and dip it into the green sugar sprinkles to create a lush green backdrop. 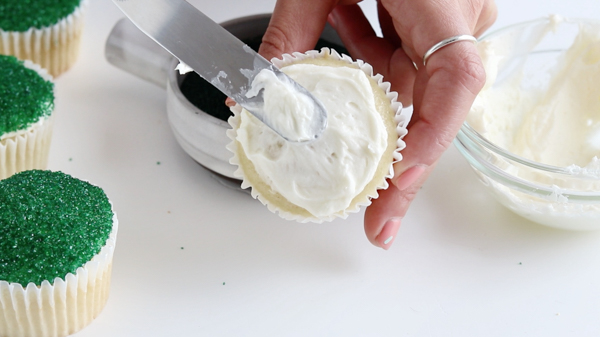 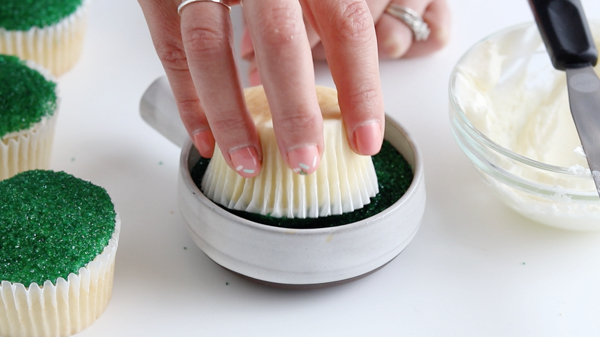 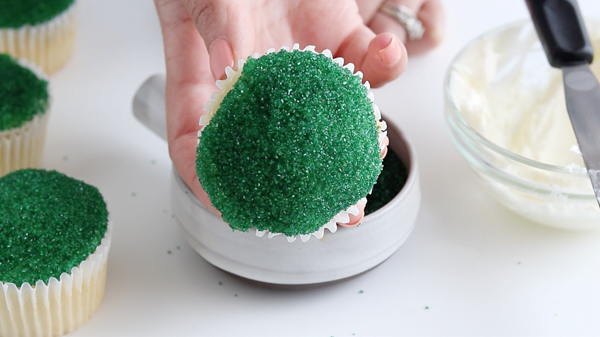 Use the pink and yellow piping bags fitted with piping tip 4B to pipe random open stars on the surface of the cupcake. Then, fit a piping bag with piping tip 109 (or any drop flower tip), fill it with the purple buttercream, and pipe a pretty flower in the center. 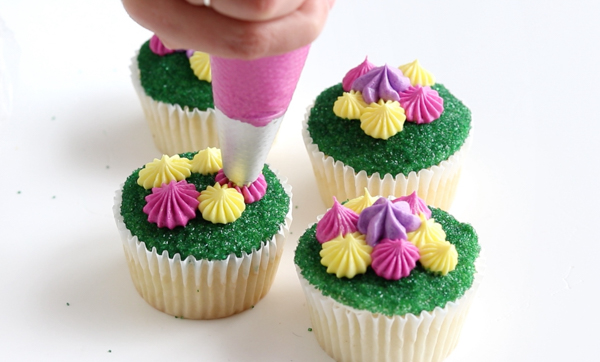 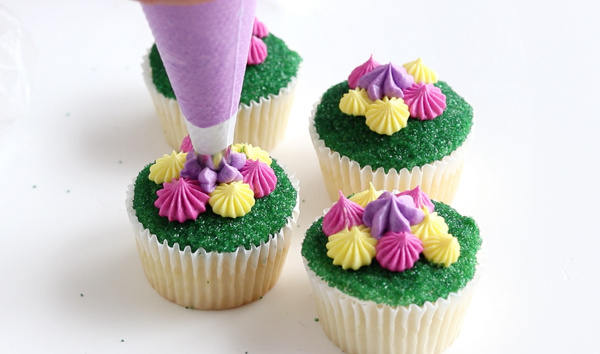 Repeat until you have four cupcakes with the lush green look. 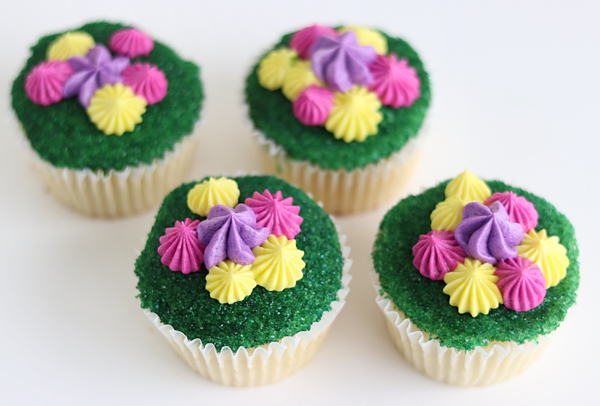 TO MAKE THE ROSETTE CUPCAKES

Fit a piping bag with piping tip 1M and fill it with the rest of the turquoise buttercream. Starting in the center of the cupcake, pipe a swirl that ends on the outer edge to create a buttercream rosette. 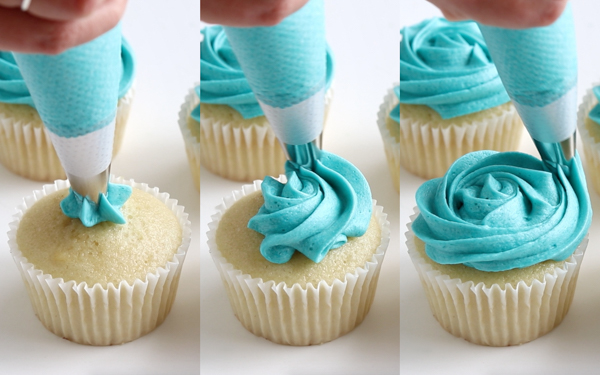 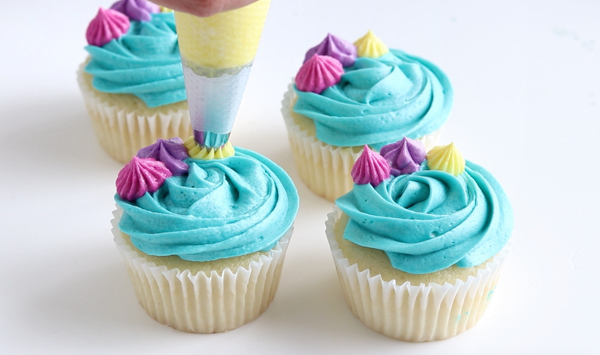 Repeat until you have four cupcakes with the rosette look. 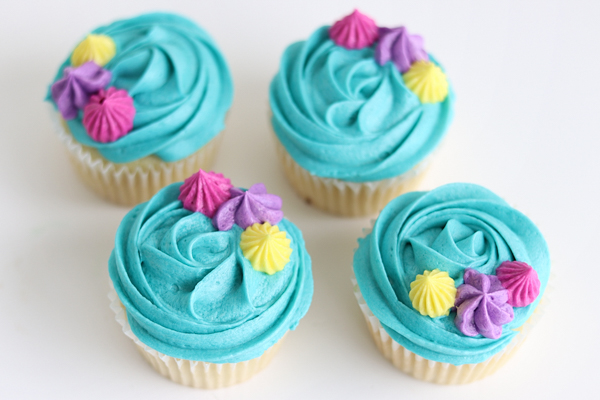 And there you have it, a whole collection of beach-themed cupcakes worthy of any summer shindig! 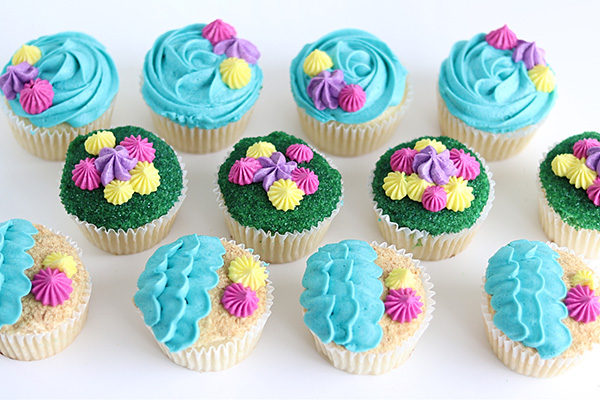 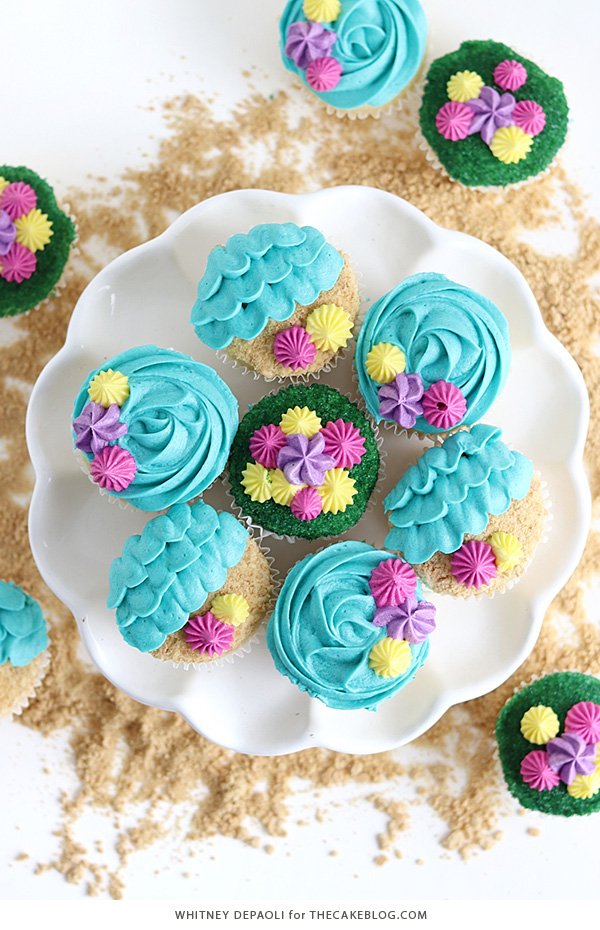 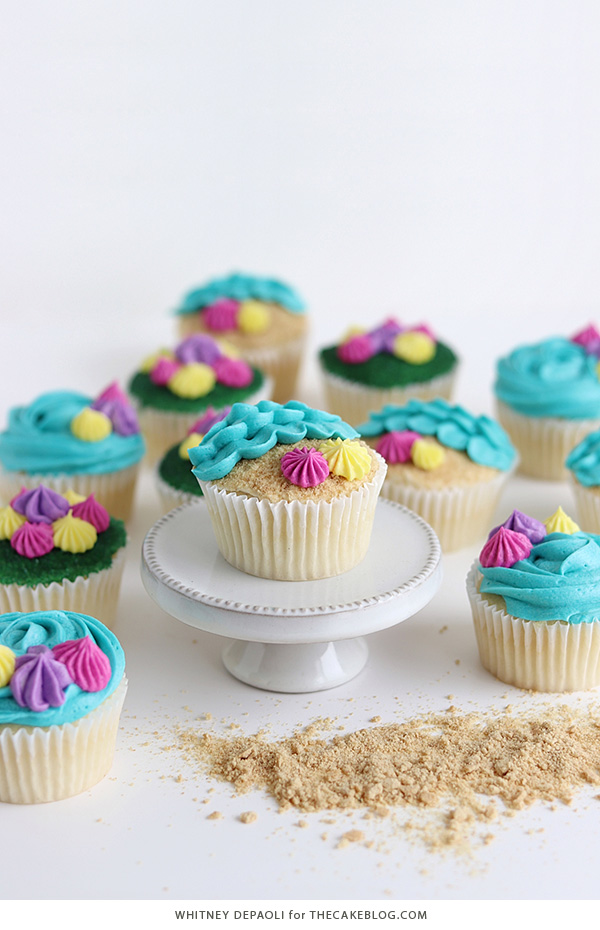 Whitney DePaoli is the blogger and cake creative behind Sugar & Sparrow. She believes cake-making should be accessible for everyone, and loves sharing her favorite recipes and tutorials that anyone can master.