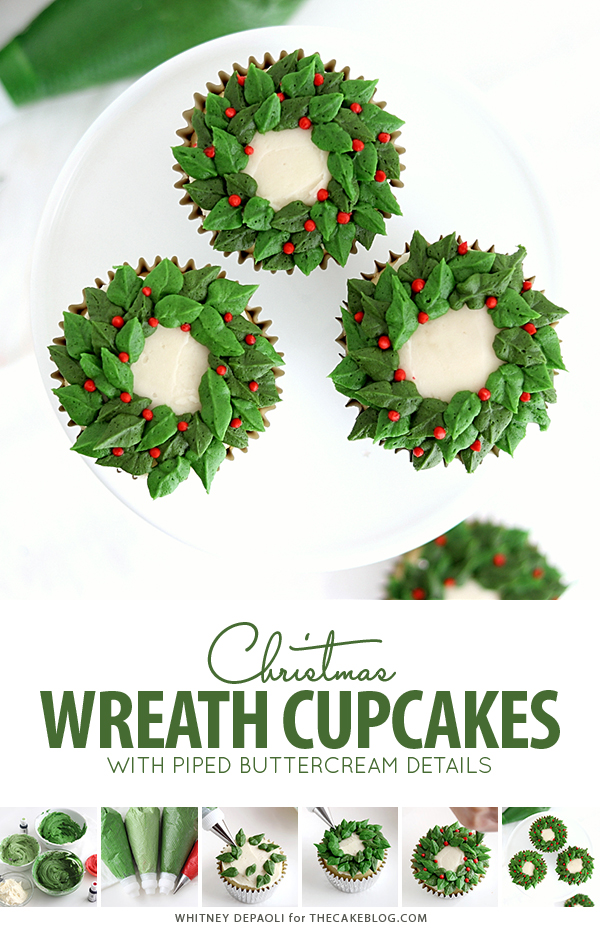 I’ve made all sorts of Holiday-inspired bakes over the years, from towering Christmas tree cakes to gingerbread house inspired projects and everything in between. But this year, as shopping centers everywhere string their Holiday lights and hang their festive wreaths, it dawned on me that wreath designs would make the perfect cupcake toppers for the season. I took to the drawing board (literally, that’s how all of my ideas start!) and got to work piping these cute little wreath cupcakes and basically squealed with delight seeing the idea come to life. They’re so festive! 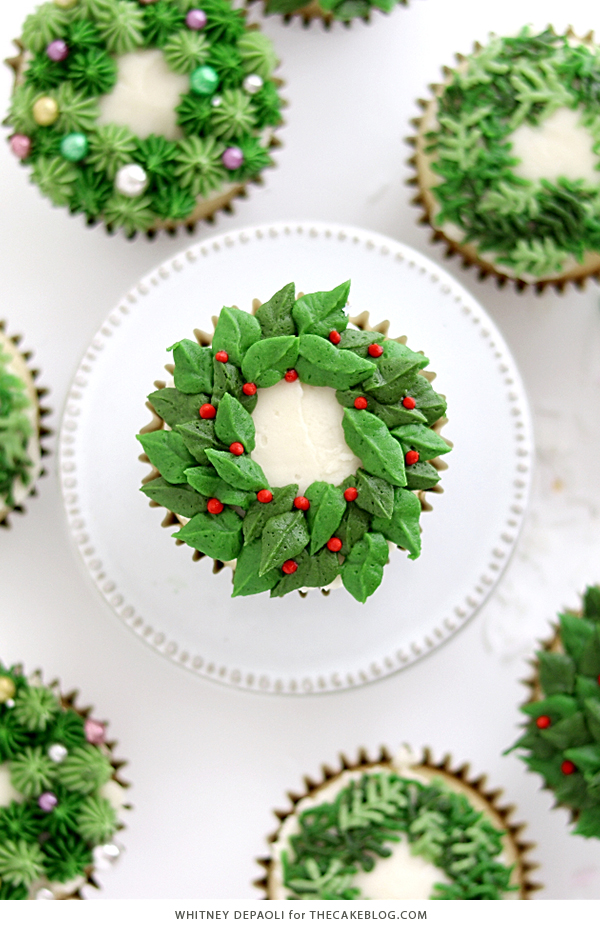 I tried three different wreath designs for this spread and ended up loving all of them so much that I’m gonna show you how to make the whole assortment. The variety of textures and colors look so great together that it’s worth making all three designs! If you’d rather stick to one or two designs instead of all three, that is totally up to you. Whatever type of wreath cupcake assortment you create, they’re guaranteed to add some merriment to your holiday dessert table. 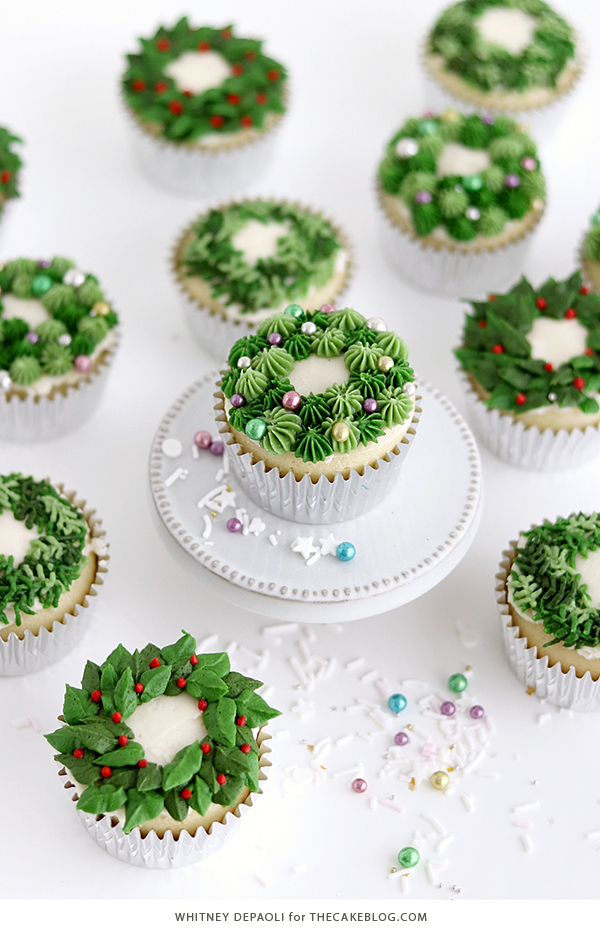 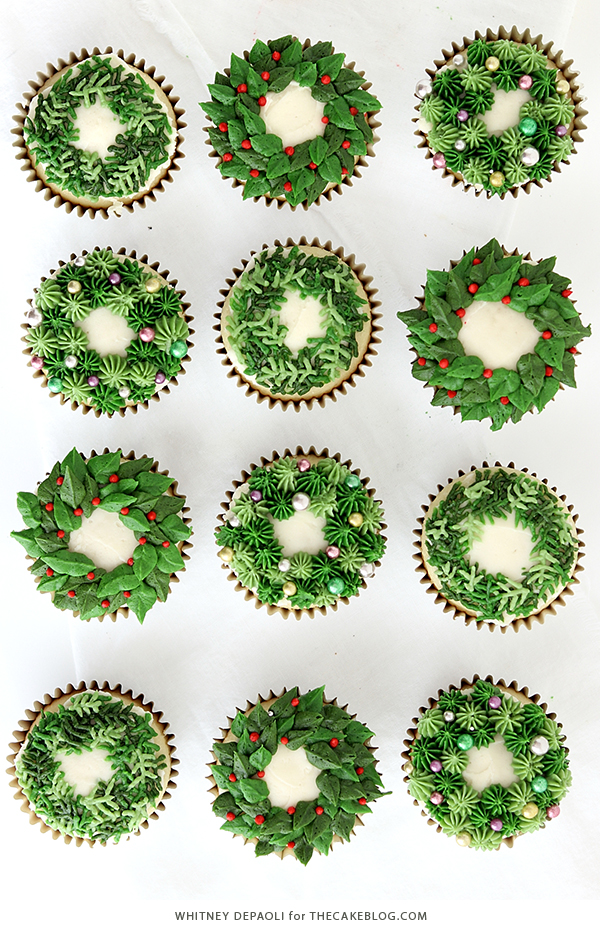 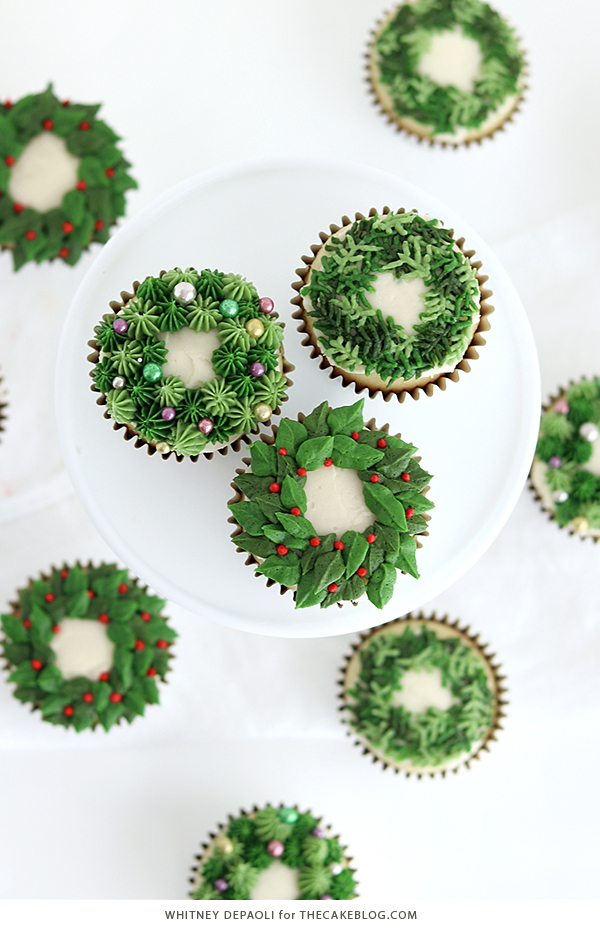 This project involves three different shades of green buttercream and a handful of my favorite piping tips. Making sure you have couplers on hand is going to make your life a whole lot easier with this one. You can simply insert a coupler into each piping bag, fill each one with a different shade of green buttercream, then swap out your piping tips as you go along. The coupler sets will essentially save you from having to fit and fill more piping bags than you need (better for the environment and your sanity)! 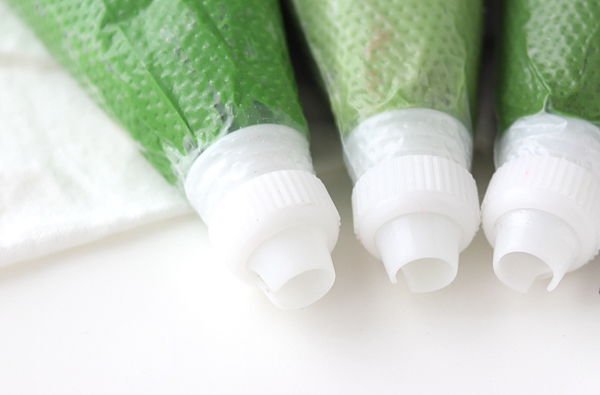 If you’ve never worked with couplers before, they’re really simple to use. Just insert the bigger piece into your piping bag, just like you would with a piping tip. Then, fit your desired piping tip to the end of the coupler on the outside of the bag and screw the ring portion of the coupler over the top. When you’re ready for a different piping tip, just unscrew the ring, place the next piping tip on, and screw it back in. So easy! 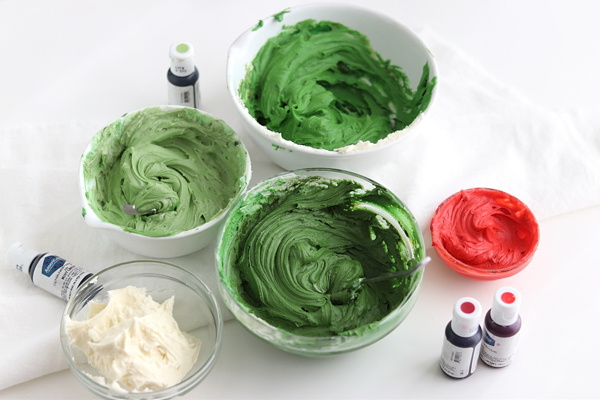 You can feel free to use any food color gel of your preference, but I used Americolor Super Red for the red buttercream and a mix of Americolor Forest Green and Avocado for the green shades. When it comes to the green buttercream, just make sure you have a lighter green, medium green, and dark green if you want to create variety in your piping. 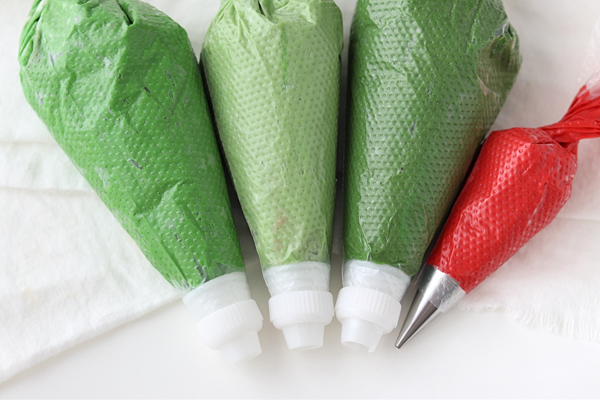 When you’re finished with coloring, place the red buttercream into a piping bag fitted with a #3 piping tip. Then, fit three piping bags with the coupler sets and fill them with the different shades of green buttercream. We’ll be swapping out piping tips with the green shades, and coupler sets make that process super easy!

Each of the wreath cupcake designs start with a lightly frosted cupcake, and this is where the uncolored buttercream comes into play. On each of the cupcakes, use a small icing spatula to frost a thin, even layer across the surface. 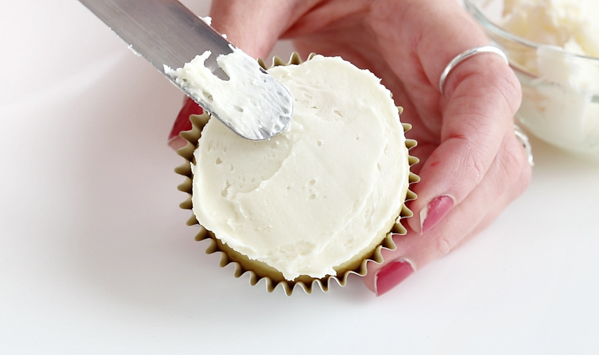 For the wreath designs with berries, fit the medium green and dark green piping bags with piping tip #352. This tip is otherwise known as a leaf tip, and it will help you easily create a leafy look for your cupcakes. Starting with either shade of green, hold the piping tip parallel with the cupcake so that the two points of the tip are vertical (aka it looks like an open beak). Then, squeeze the piping bag while pulling it towards you to create leaves. Go around the entire edge of the cupcake with the first color, leaving open spaces for your second color. 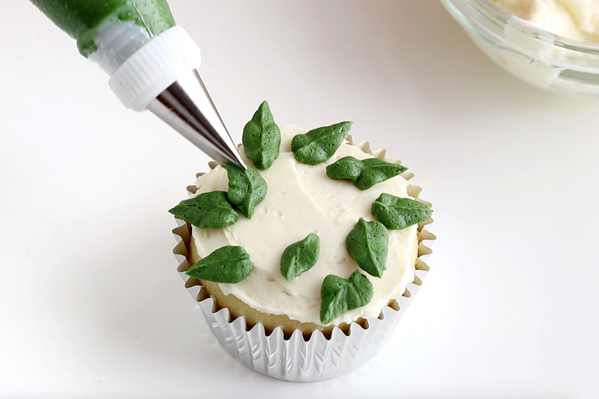 Using the same leaf piping technique, fill in the open spaces with your second color. This will create a two-toned leafy wreath for you to decorate with buttercream berries. 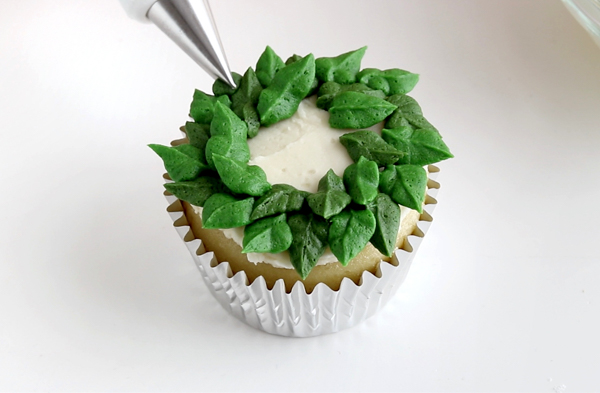 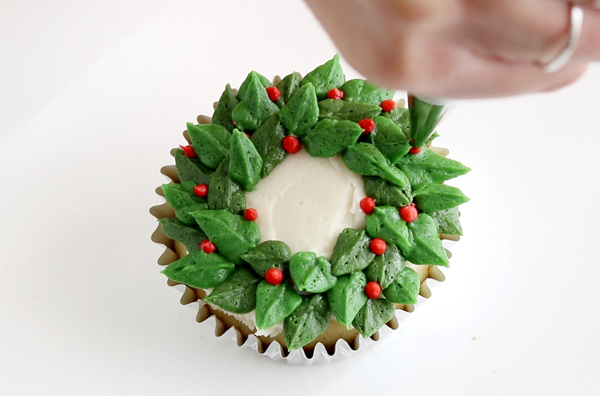 Repeat the process until you have four beautiful berry wreath cupcakes. 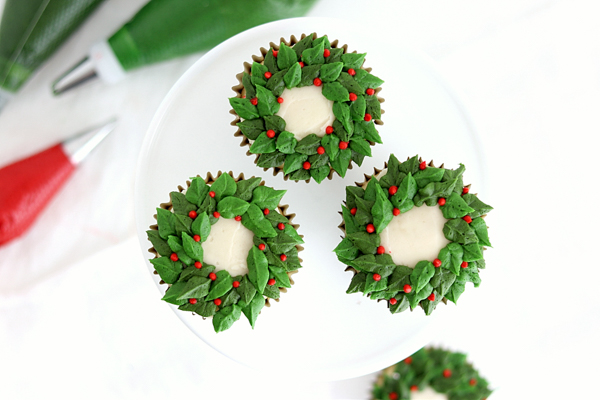 This one is a little more time consuming, but so worth the effort! Fit each of the three green piping bags with a #3 piping tip. Starting with the green shade of your choice, pipe pine sprigs around the edge of the cupcake, leaving plenty of room for the next two shades. Essentially, a pine sprig involves piping a line with v shapes over the top of it. 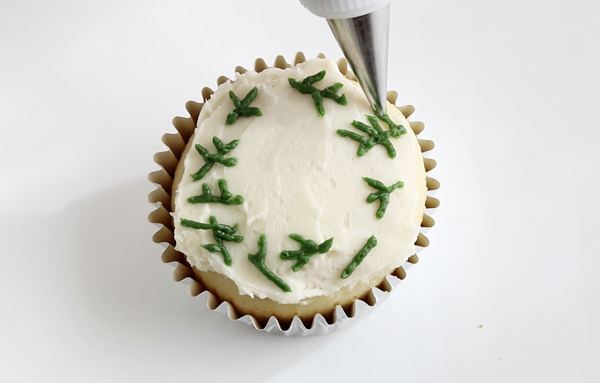 Fill in the open spaces with the following two colors in the pine sprig designs until you have very little white space peeking through. 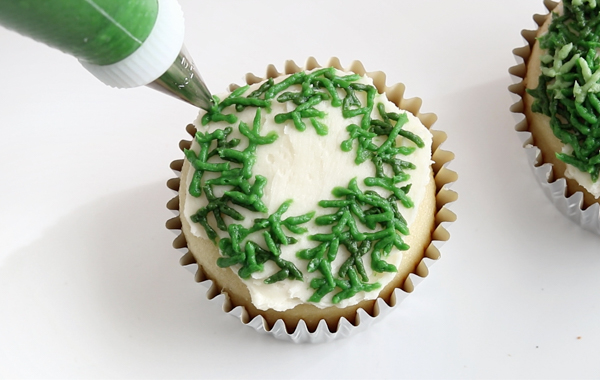 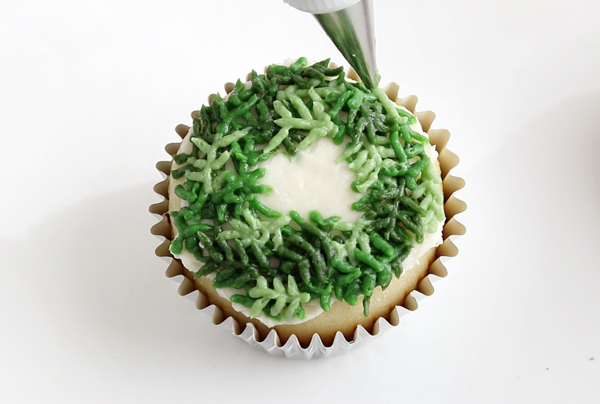 Repeat the process until you have four pretty pine sprig wreath cupcakes. 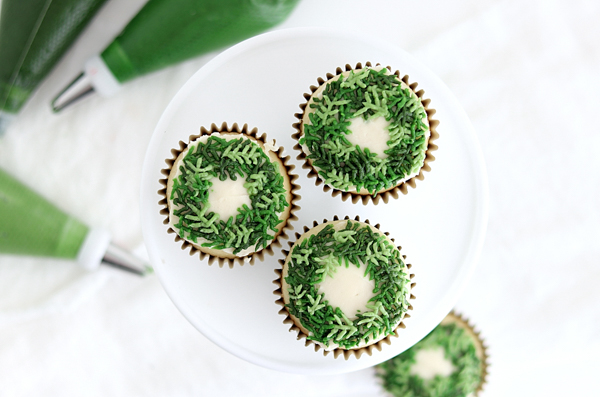 For these fun sprinkley wreaths, fit the piping bags with the darker shades of green with a #199 piping tip. Starting with the color of your choice, hold the piping tip vertically over the surface of the cupcake, squeeze, and pull towards you. This will create some cute little drop stars. Continue adding them around the edges of the cupcake, leaving plenty of space to fill in with the other shade of green. 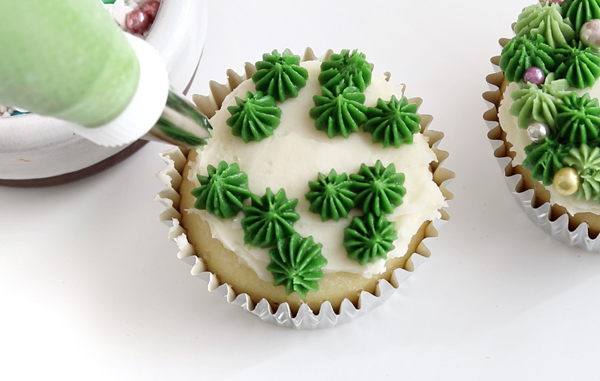 Fill in the open spaces with more drop stars in the next shade of green. 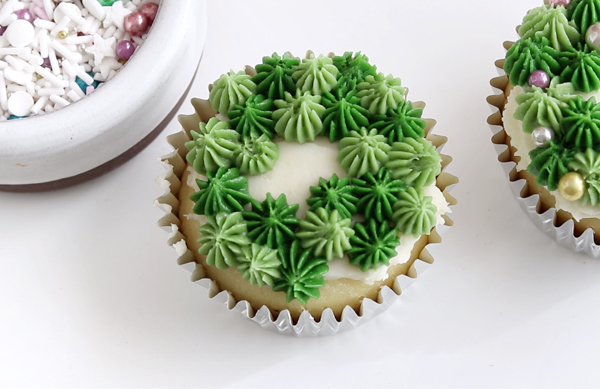 Then, add sprinkles over the surface to create the look of ornaments. I used Fancy Sprinkles in the “Serendipity” mix for this part, but you can feel free to use any spherical sprinkles you want! 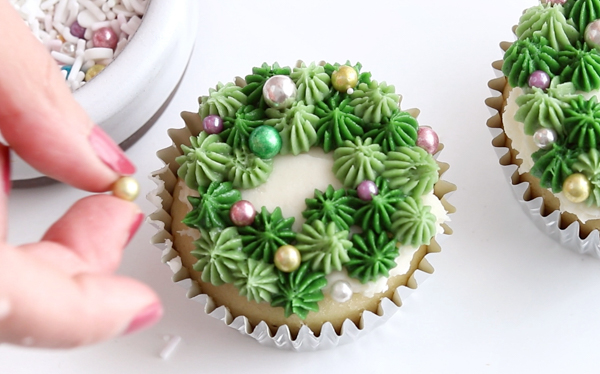 Repeat the process for the remaining four cupcakes. 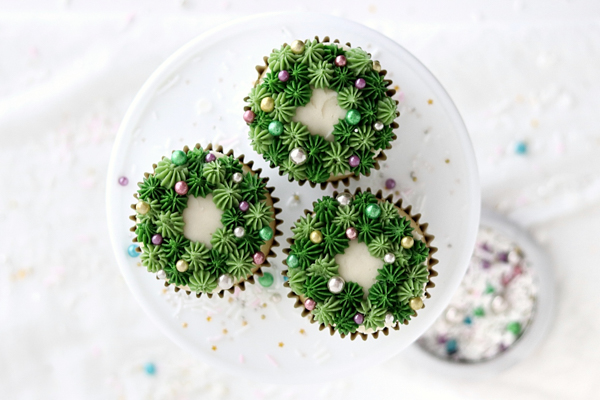 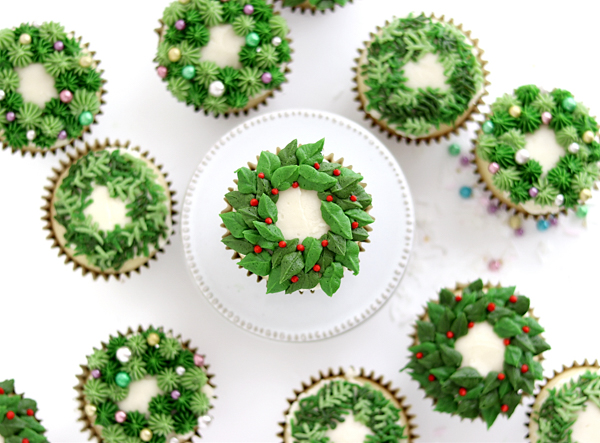 Be sure to give these festive wreath cupcakes a try this season and Happy Holidays to all!

Whitney DePaoli is the blogger and cake creative behind Sugar & Sparrow. She believes cake-making should be accessible for everyone, and loves sharing her favorite recipes and tutorials that anyone can master.