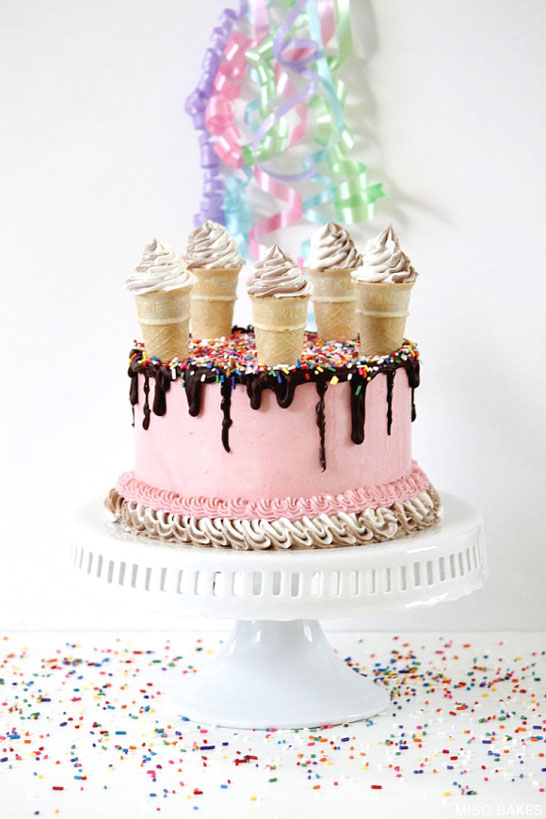 I scream.  You scream.  We all scream for ice cream!

Growing up, ice cream cakes were considered the novelty of all novelty cakes.  Fondant covered cakes were almost unheard of and carved cakes were primarily available in 2-D.

From what I recall, most of the ice cream cakes were decorated in a similar fashion.  They had some form of a clown piped onto the cake with a star piping tip in a primary (red, blue, or yellow) colored buttercream.  The clown always wore a clown hat made of an ice cream cone cut in half. Lastly, there was a generous sprinkling of rainbow-colored sprinkles and a cluster or two of plastic balloons (also in primary colors).  Sound familiar? 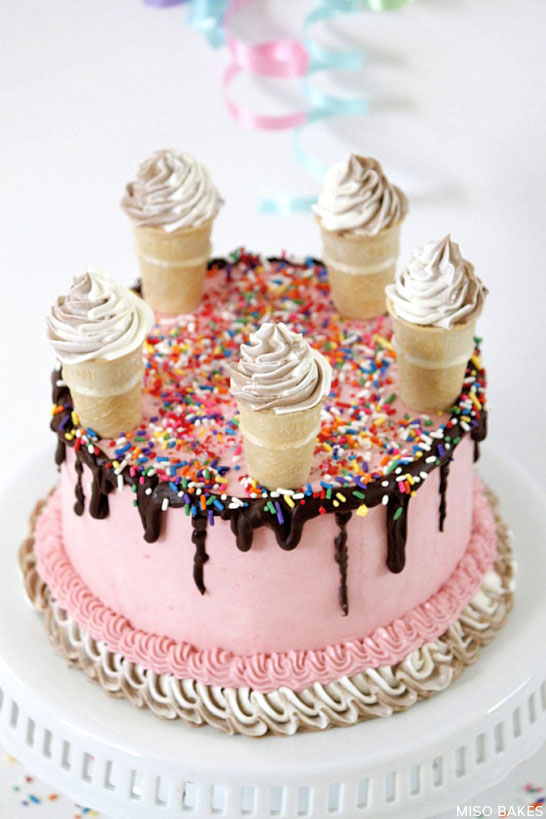 I think clowns were ‘the thing’ growing up.  They were everywhere.  A birthday party was not complete without clown-themed napkins, plates, plastic tablecloths, favor bags and cups.  Oh, and I can’t forget the crying kid.  Someone had to cry to complete the party.  The reason?  Plenty. Either someone was afraid of clowns, or there was a shortage in cake and someone wanted seconds.  Or, someone’s party favor bag ripped and she no longer had a bag to carry her party hat and candies in.  Or, someone spilled his fruit punch and it got all over another kid’s new party dress.  Oh the fun childhood memories. 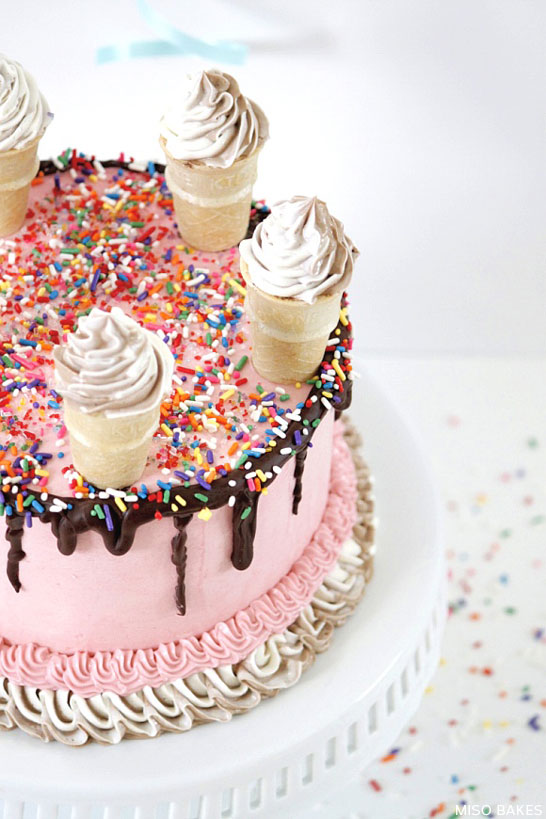 As a child I would worry so much about the ice cream cake melting that I would have my mom take the cake out of the freezer as my friends sang happy birthday and have her stick it back in the freezer right after I made a wish and blew out the candles.  My friends and I would play hopscotch or hide-and-seek until we needed to cool down.

I smile in embarrassment as I think of my childhood worries.  Therefore, I created an ice cream-themed cake that is ice cream free!  There is not an ounce of ice cream in the cake so it’s good for those wanting to display the cake on dessert tables, or for those who have a worry-wort child (like I once was). 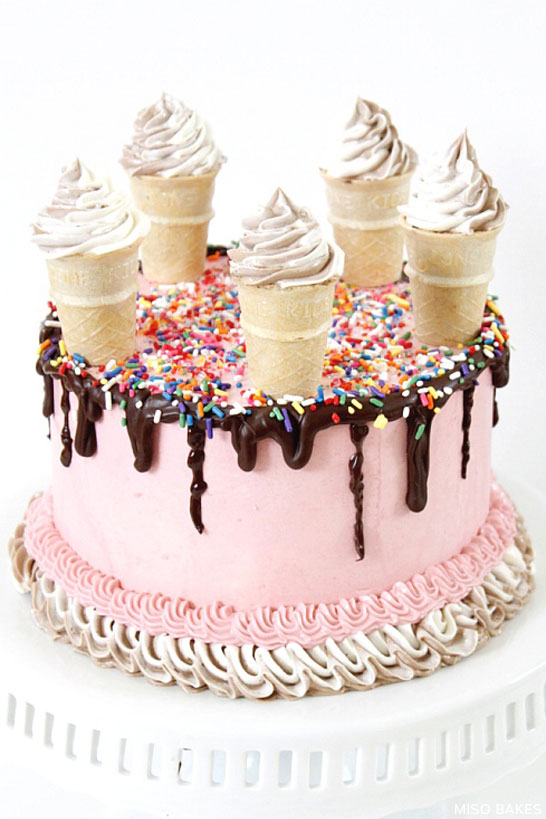 1. Bake, torte, fill and frost cake to your liking.
2. Chill the cake in the refrigerator.
3. Melt some chocolate (you can add cream to thin it down) and let it cool slightly so it will not melt the buttercream when drizzled on.*
4. Put chocolate in a cornet (piping bag made of parchment) and drizzle around the side of the cake.
5. Sprinkle rainbow sprinkles on the chocolate before it hardens and on the top of the cake.

*You do not want your chocolate to cool too much (like I did) because the chocolate will harden fairly quickly due to the cold buttercream.  If you do what I did, you will not get pretty drizzles and therefore will have to make faux drizzles like me. (Learn how to make gorgeous chocolate drips with this tutorial.)

1. On the flat bottom of the ice cream cones, poke a hole big enough to insert a lollipop stick.  I found using an exacto knife works best.  A sharp paring knife will work, too!
2. Stuff the cones with cake pop stuffing (mixture of cake and buttercream) up to the rim of the cone.
3. Dip lollipop sticks in chocolate and insert into the hole on the bottom of the cones.**
4. Place cones upside down on a small tray and chill in the freezer for a few minutes.
5. Put vanilla buttercream and chocolate buttercream side by side in a piping bag with a medium star tip.
6. Squeeze the bag until you get both chocolate and vanilla buttercream in the swirls.
7. Pipe swirls on the cones.
8. Insert the ice cream cone cake pops into the cake.

** You can do without the sticks if you will not be transporting the cake or moving it around much. Just be careful because the cones will topple over.

For even more ice cream detailing:

Miso is based in Los Angeles where she is a cake designer and teacher. She also travels internationally to share her craft and passion with others.