Spiderweb Cake – how to carve buttercream icing to make a spooky spiderweb cake design. So easy and no need to pipe! A new Halloween tutorial by our contributor Erin Gardner. 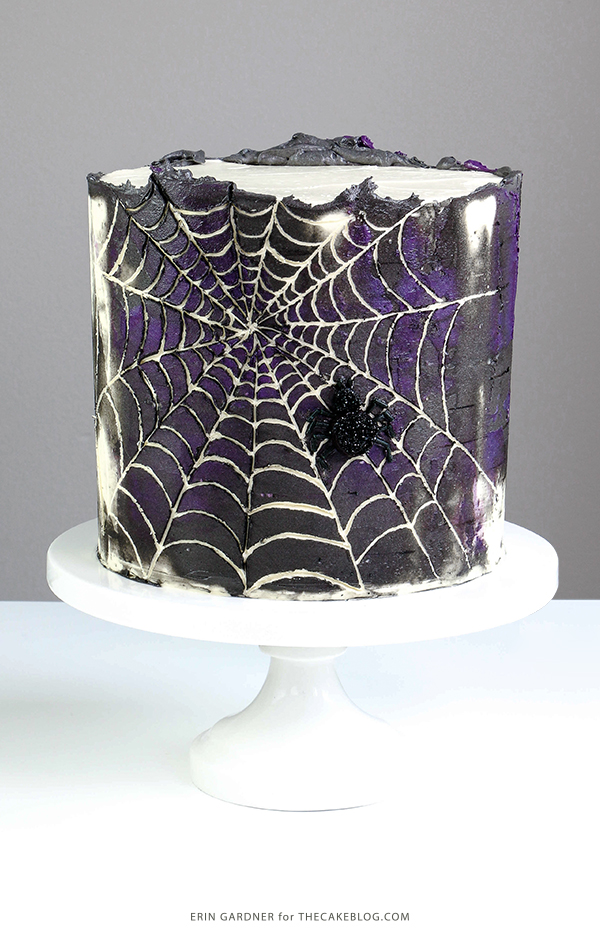 As I’ve stated a number of times in many other cake decorating tutorials, I’m not a fan of piping. I envy those with a steady hand and firm resolve to pipe, but I am not one of them. So when I had the idea for a simple but spooky Halloween cake involving a sparkly candy spider, I had to figure out how to make a web for her to live on that didn’t involving piping lots of tiny icing lines on the side of a cake. (Is there anything worse?!) Of course, I could have rocked Carrie’s original Marshmallow Spiderweb Cake technique from 2012… but it was time for something new! 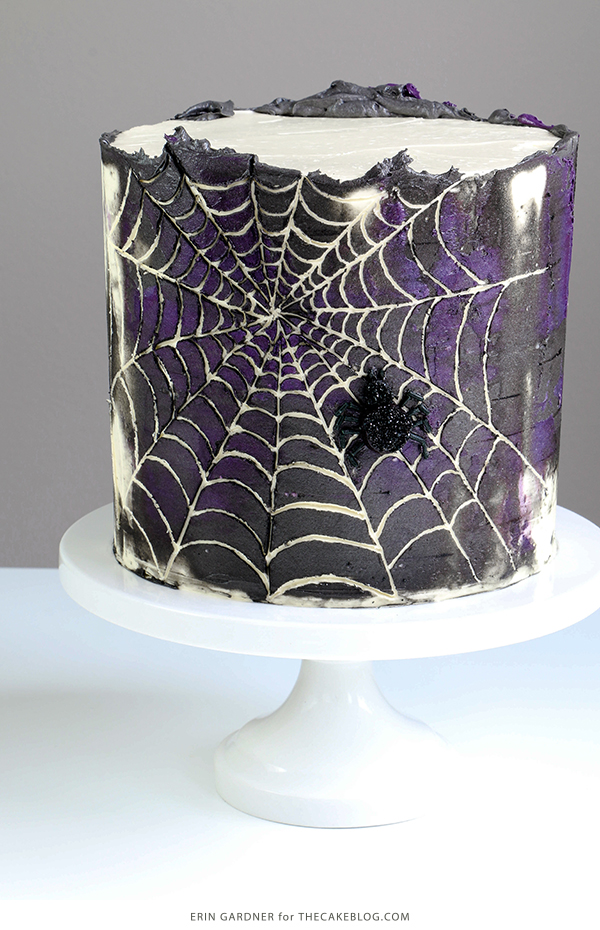 Sometimes when I’m presented with a decorating challenge I try to think about things in opposites. If I don’t want to apply more buttercream to achieve a design, I’ll take it away! Buttercream carving is an idea that’s been floating around Pinterest boards and Instagram feeds lately. The cake artists behind Tortik Annushka shared a cake design which involved carving circles of different depths out of layers of multiple colors of buttercream. Erica O’Brien’s buttercream pinstriping technique (now a decorating staple which you can learn here) involves removing channels of buttercream with a comb and then filling in the empty spaces with a new color. My very simple spider web idea was born from those same concepts. The result is a creepy but cool technique easy (and fun) enough to do with your kids.  A real Halloween treat! 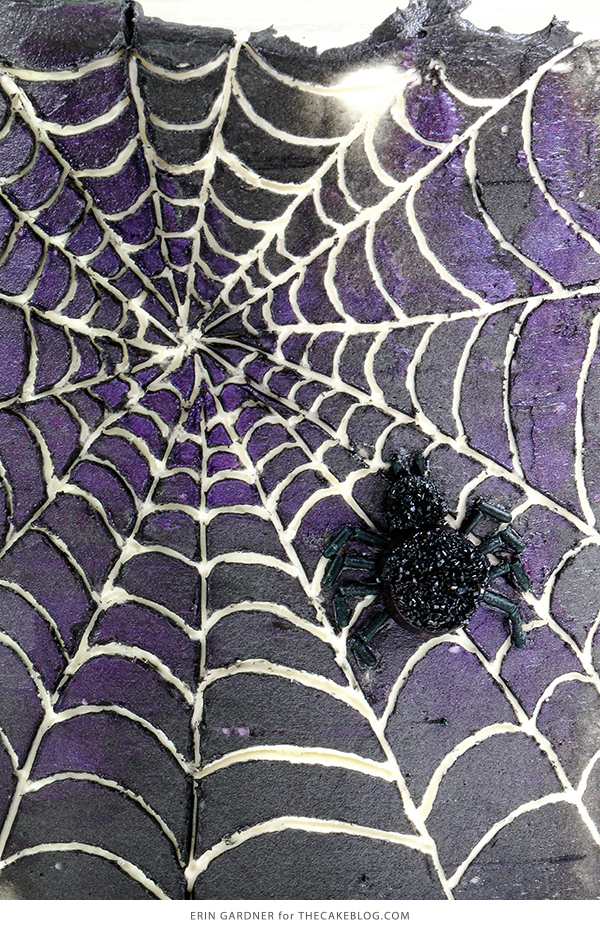 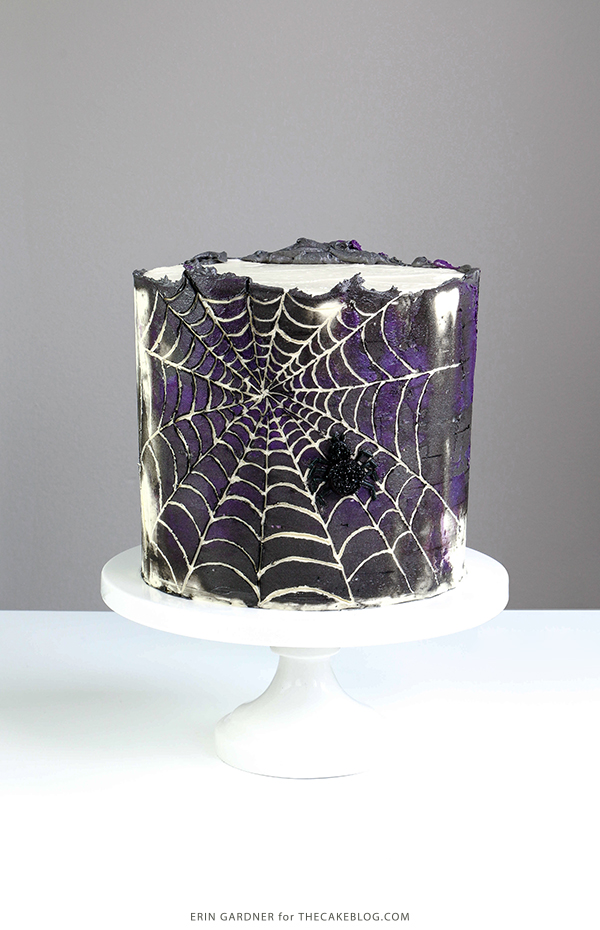 Set the chilled cake on a turntable. Smear large blobs of dark gray buttercream around the sides of the cake. Smear smaller dabs of purple buttercream over and between the gray blobs. Hold the blade of a bench scraper or large icing spatula vertically along the side of the cake. Spin the turn table while holding the scraper still to smooth and smear the buttercream. Add more buttercream if needed. The white base coat should be mostly covered, but it’s ok if it peeks through in spots. 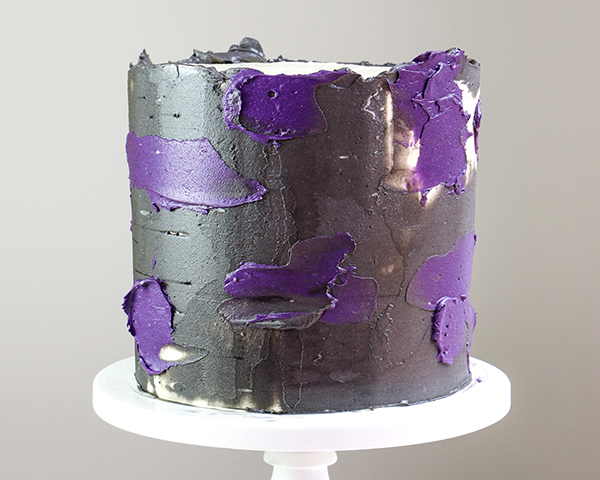 Repeat until the sides are #smoothenough. I’m not typically one to obsess over the smoothness of my buttercream, but with this technique life will be easier for you if you attempt to get the colored buttercream layer somewhat even. Thankfully, there’s no need to bother with attempting to smooth the top! I’m taking a cue from Violet Bakery’s play book (most recent royal wedding cake) and using that rough, scraggly edge to up the creep-factor with this cake.

Pop the cake back into the fridge until the colored buttercream layer has completely hardened, about 10 minutes. 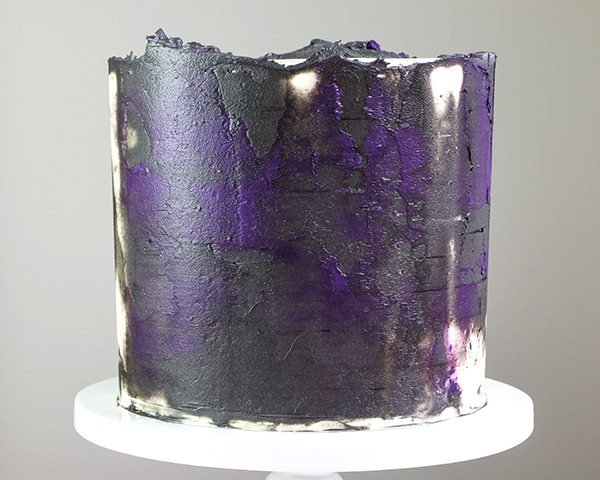 Pick a deeply colored spot on your cake to start the spider web. Use the tip of a skewer or toothpick to draw lines through the colored layer of buttercream out from the center point. Don’t worry about making the lines even or particularly straight. Press the tip of the skewer in deep enough to scrape through the colored layer of buttercream, revealing the white line below. If you’re not happy with your first few lines, just smear on a little more buttercream and pop the cake back in the fridge. Return the cake to the fridge at any point in the process if the buttercream starts to get too soft. 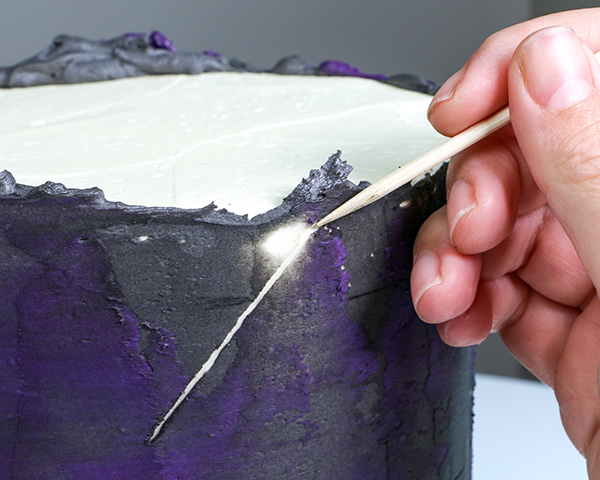 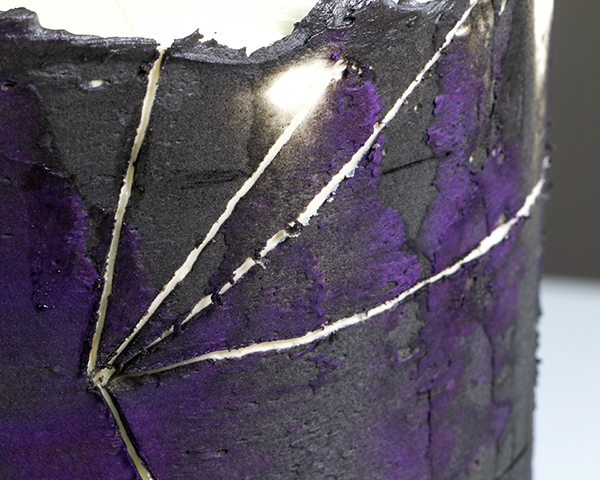 As you “draw” on the cake, little remnants of the colored buttercream will ball up along the edges of the line. Go back through with the skewer and collect the scraggly edges, wiping the tip of the skewer between swipes. 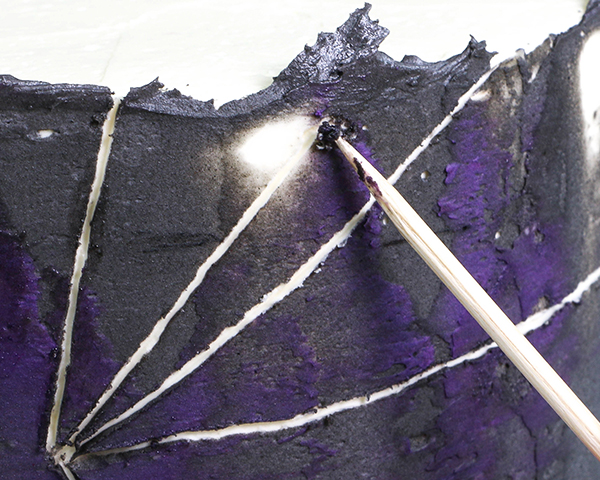 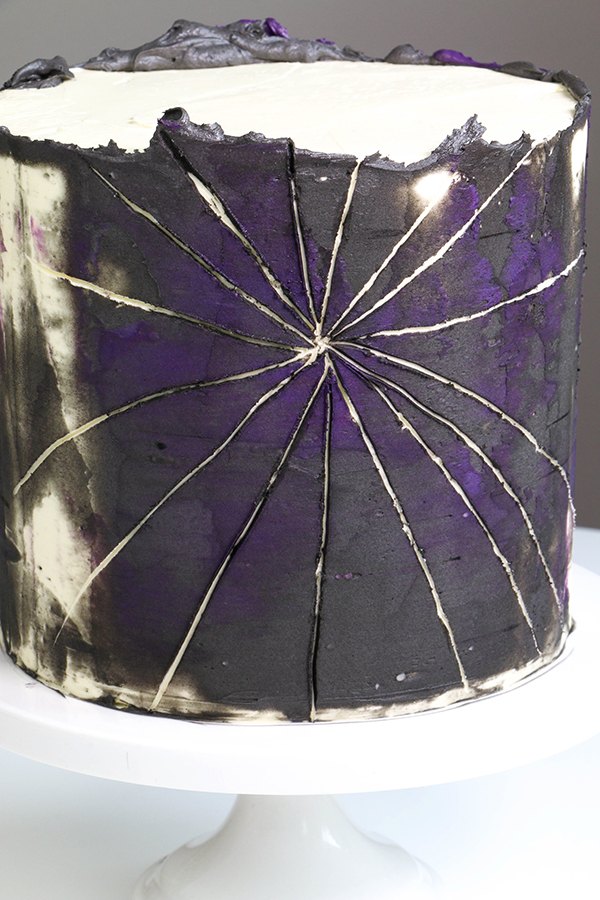 Add tiny curved lines connecting the longer lines. Space the curved lines farther apart as you move out from the center. One again, pop that cake back in the fridge at any point of the process as needed. 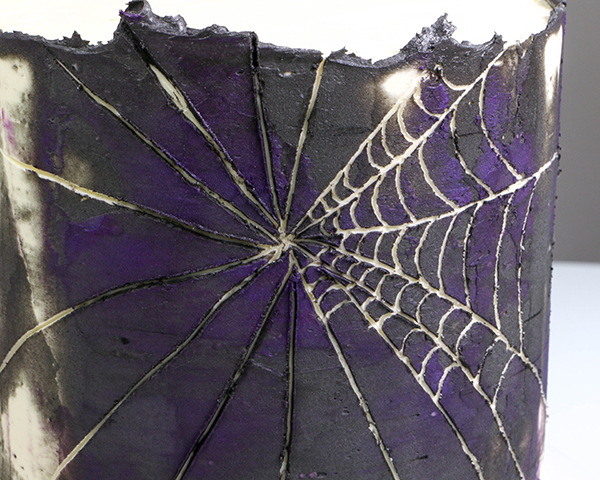 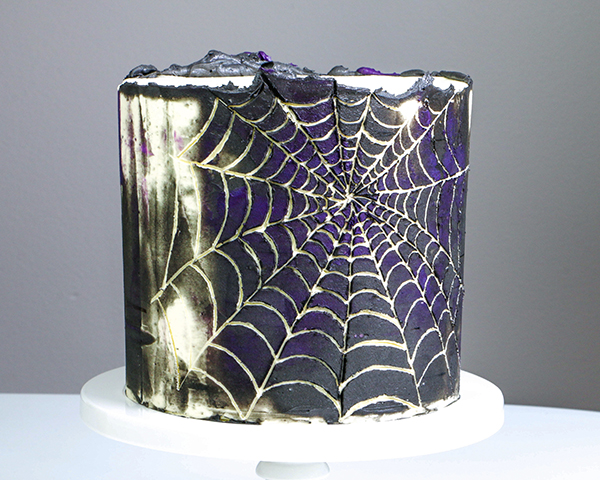 Use a small knife to trim off the top of the black licorice drop. Discard or devour the top. Dip the cut side of the drop into the black sparkling sugar. 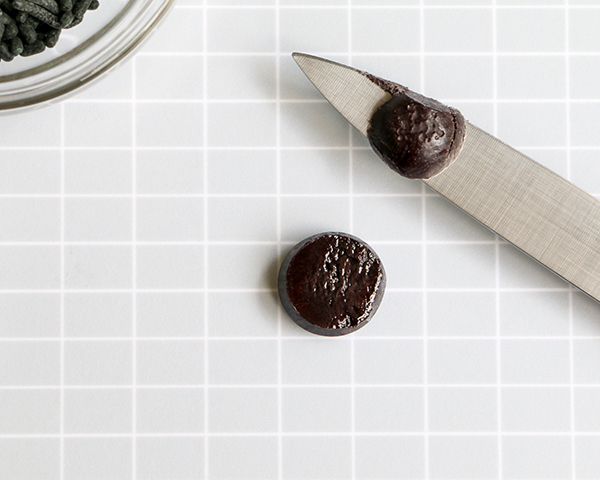 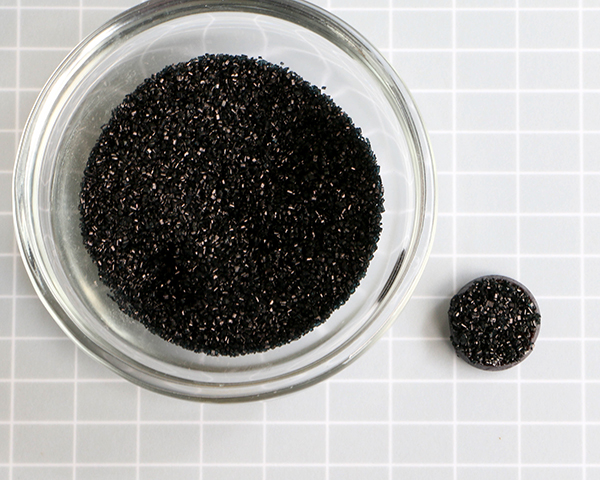 Cut the tip off of the black jelly bean, then cut the tip in half again. Dip the cut side of one of the domed halves into the black sparkling sugar. 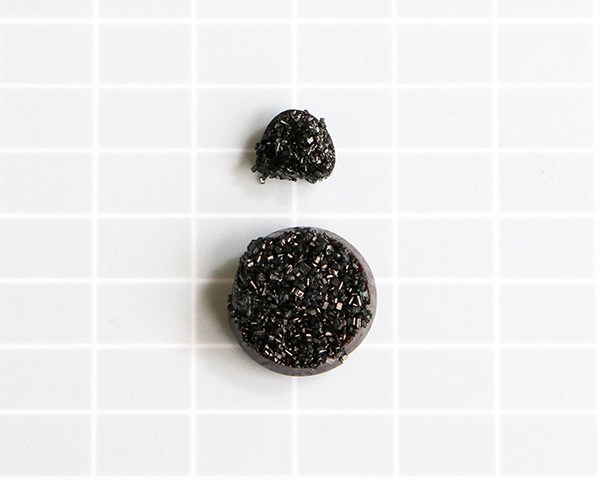 Press the sparkly licorice drop onto the cake wherever you’d like your glamorous spider to live her life. Add the sparkly jelly bean tip for her head. Carefully add 8 black sprinkle legs around the body and two tiny sprinkles for her mouth, or something. Sorry, wasn’t googling spider mouth parts. She’s your fancy spider, so make her as fierce as you like. 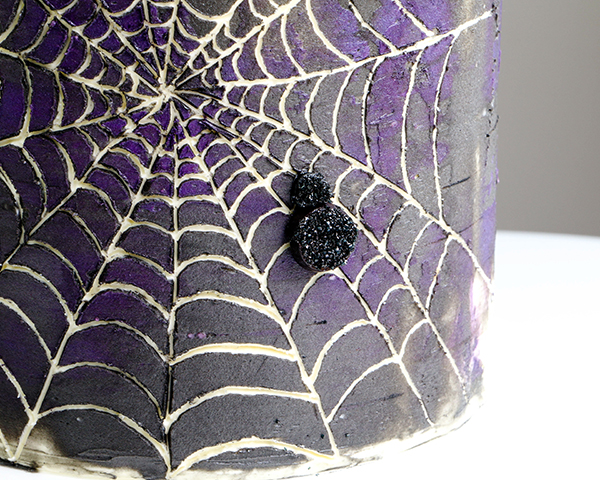 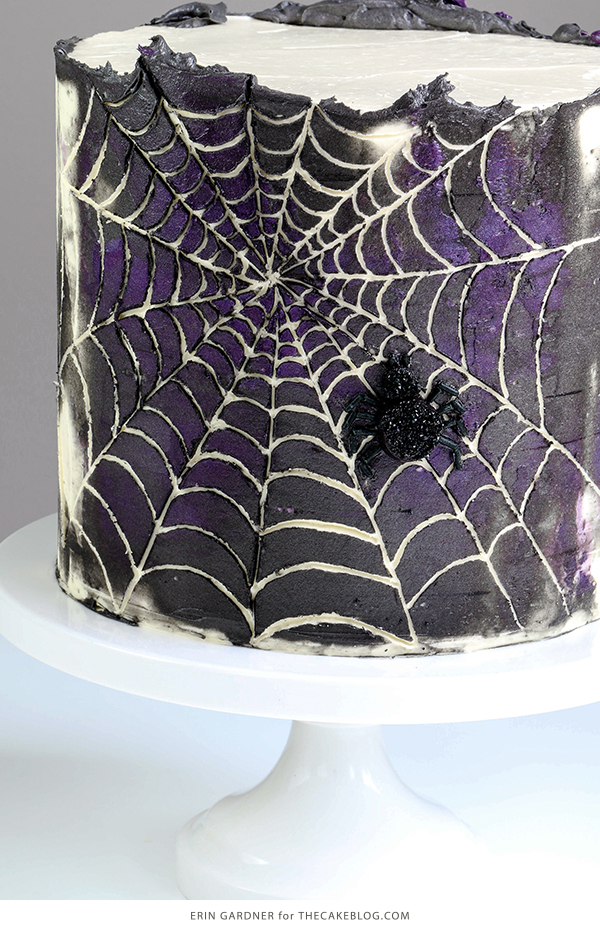 Erin Gardner is a pastry chef and cake designer. Her main focus is ErinBakes.com where she shares fun and accessible recipes and techniques. Read more about Erin on her bio page.